Copeland Mountain is a tough one

Copeland Mountain is a tough one

A plan begins in many different ways and this weekend it was the utterance of “How about Copeland?” from Fanks lips. He actually smiled as he uttered it and it lit a bit of a spark in me.
It wasn’t Copeland Lake he was talking about but 13,176 ft. Copeland Mountain, the lake’s namesake.
Although I had never went to the summit, I had been on and over it’s eastern ridge a few times and knew the route to there. I had played with the idea of a summit bid but always though it would be a big day.
Well, I guess the spark and thinking about doing it for the last 20 years made it seem possible to do the 4800 ft. of gain and 16 miles round trip as a day trip.
It would be a comparable trip to doing Longs Peak with a little more mileage and a lot of off trail travel and I knew Frank would be a good companion for it.
We met at the trailhead at 4:00 am and began hiking within twenty minutes after adjusting our boots and putting on our headlamps. Although the moon was just bright enough to hike without a headlamp, we chose to use lamps and make better time. It always amazes me how one puts his head down and just follows the beam of the light. So much so that I almost took the spur trail over to Copeland Falls but I noticed the fork and the less traveled trail I had started down. I stopped and looked up to read the sign, yep, wrong way.
We did make good time to Ouzel Falls and we passed them just as the sun was beginning to come up so we rushed to the overlook a bit past the falls where we enjoyed a small snack and the sunrise: 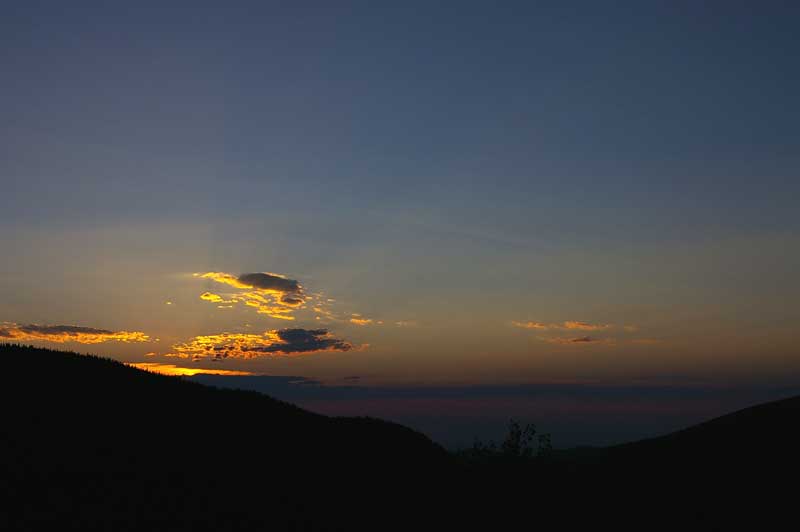 It didn’t take long to reach the ridge/burn area where we got a view up the canyon at Ouzel Peak and Copeland Mountain on the left: 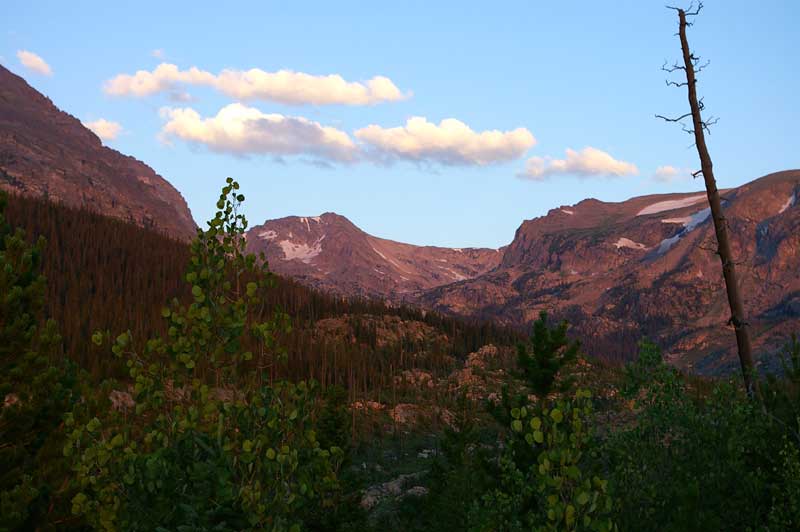 We looked at our route up on the left side of Copeland Mountain: 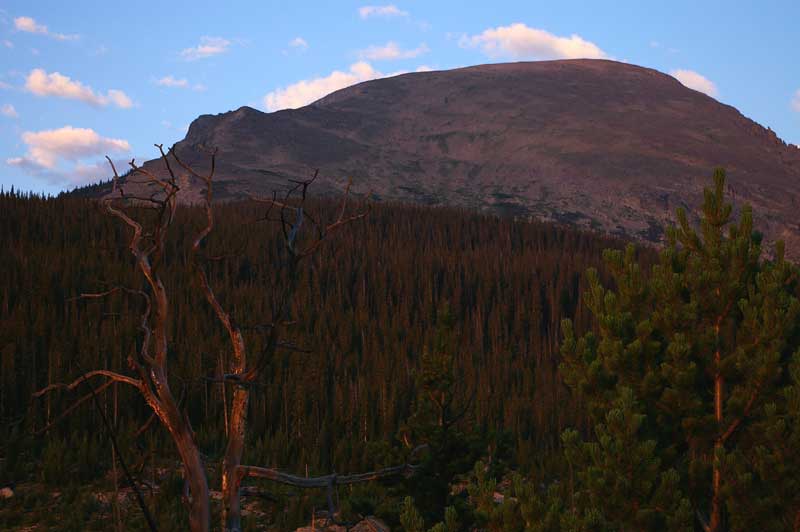 It was breezy as we traveled along the ridge but we soon reached the wooded trail to Ouzel Lake where we stopped to put on bug spray and have a decent breakfast: 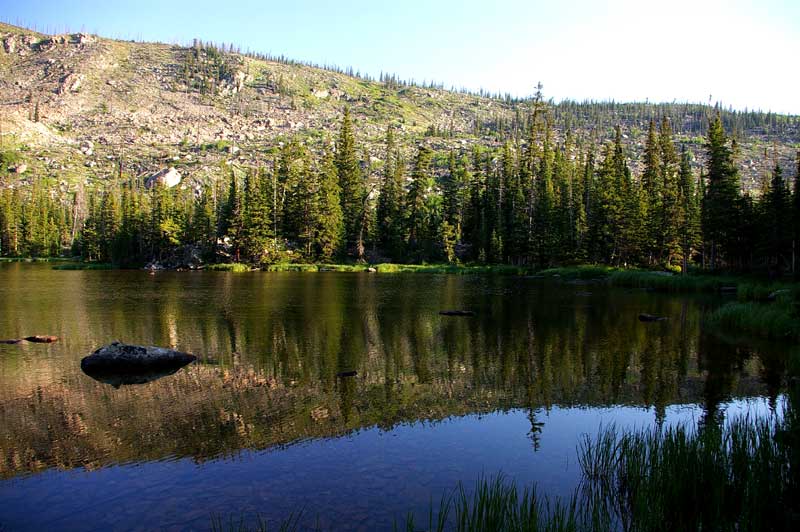 After passing Ouzel Lake we were traveling off trail up a very steep wooded area with lots of deadfall that was nearly a nightmare to navigate. I was able to see elk trails though and even got on a set of fresh tracks that lead us for quite awhile. It was tiring though so we stopped for a break after coming out of the thick trees. We sat in a pleasant little clearing with a view: 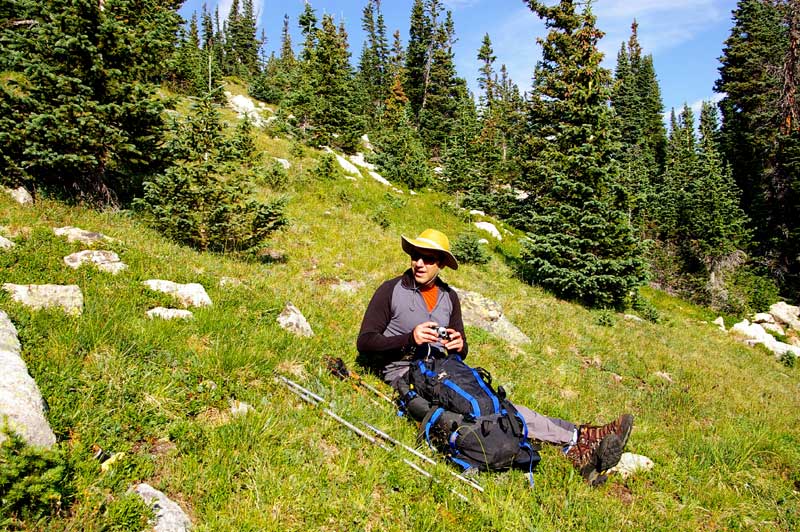 It would be nice to be above the thick trees, which wouldn’t block our view anymore: 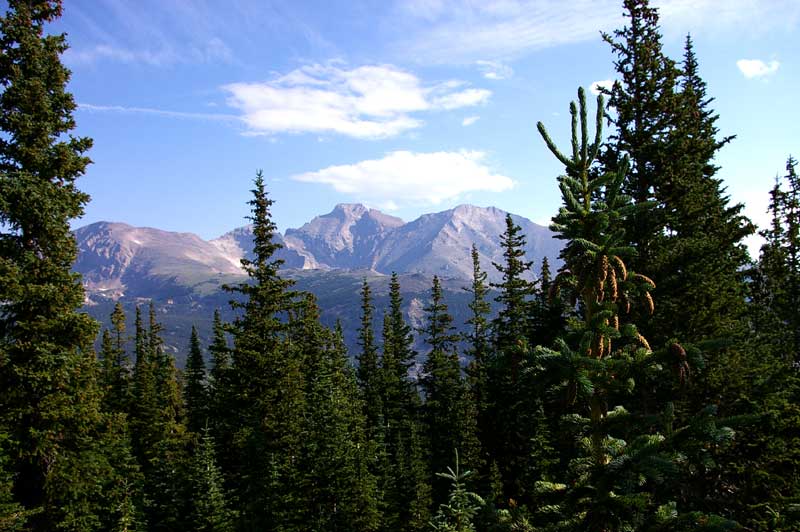 We crossed and climbed the rest of the way to the summit by traversing rocky areas and going up the small braids of tundra in the rock fields. We were able to find solid footing through the rocks and made good time, reaching the summit at noon where we sat having lunch and taking pictures.
The view across Wild Basin to Longs Peak gave a view few see: 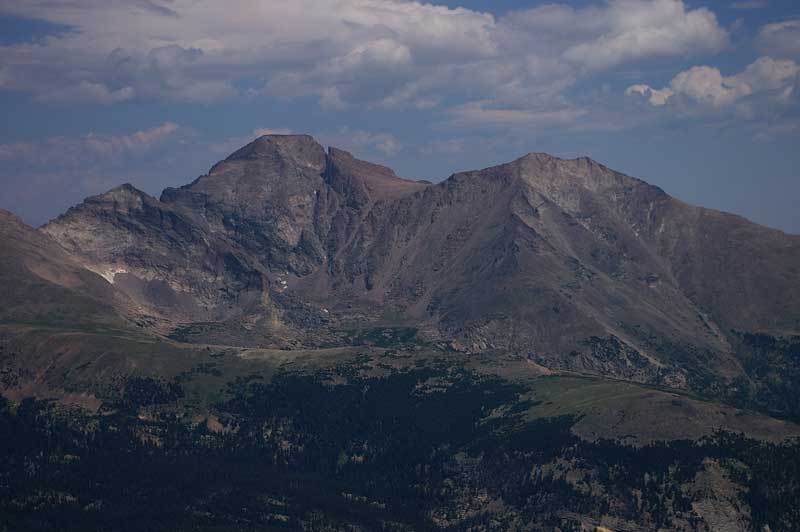 Wild Basin, in its entirety, is a very large area of Rocky Mountain National Park: 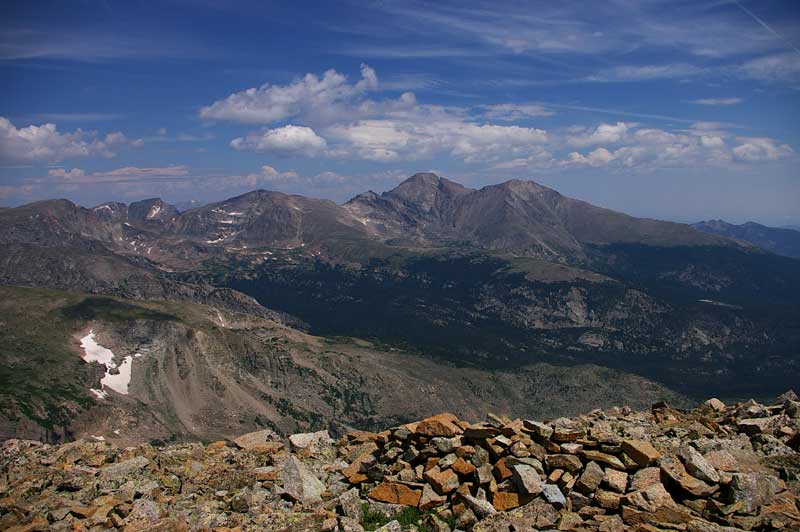 Ogalalla Peak was to the west with a view over its east ridge of the St. Vrain Glaciers that are the headwaters for the Middle St. Vrain River: 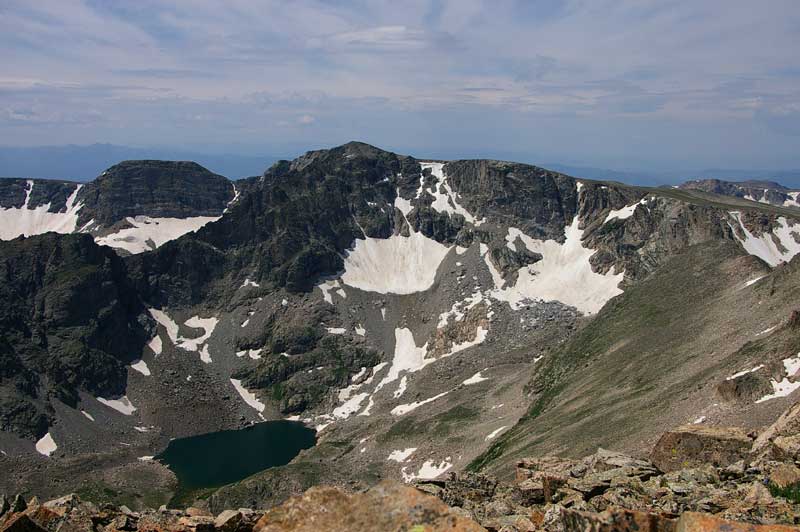 Navajo Peak was clearly visible to the south with its pointed summit block: 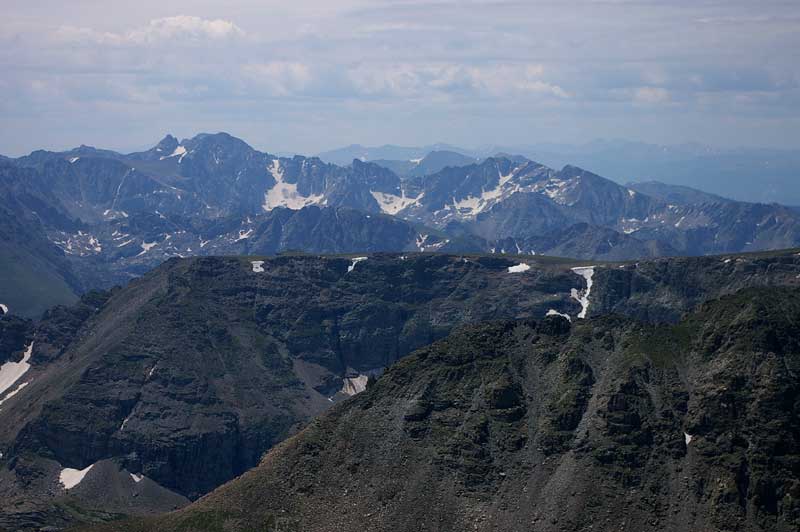 We could see Ypsilon Mountain between McHenrys Peak and the flank of Chiefs Head: 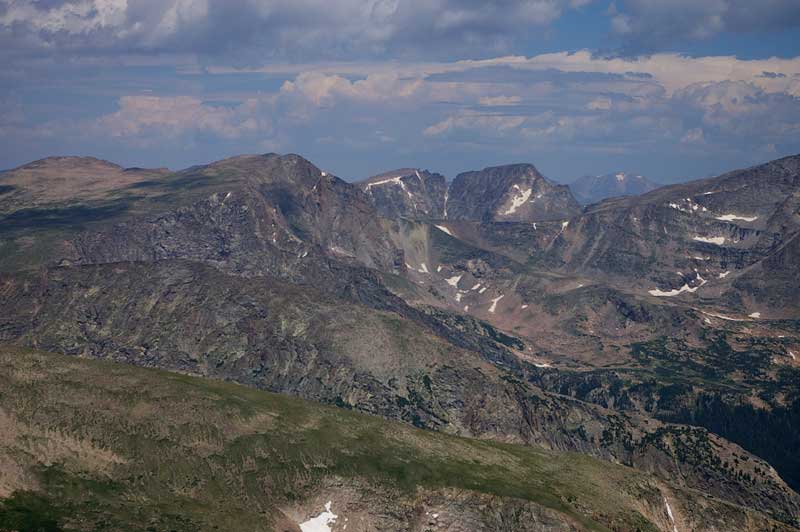 Mount Richthofen is 25 miles away on the northwest corner of RMNP and just left of center in this picture: 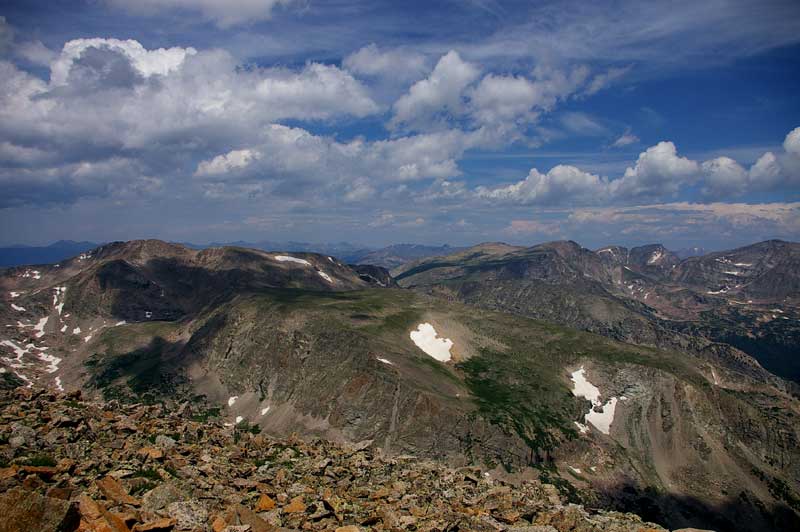 We could see Pipit Lake and (lower) Bluebird Lake in the drainage we had started up after passing Ouzel Falls: 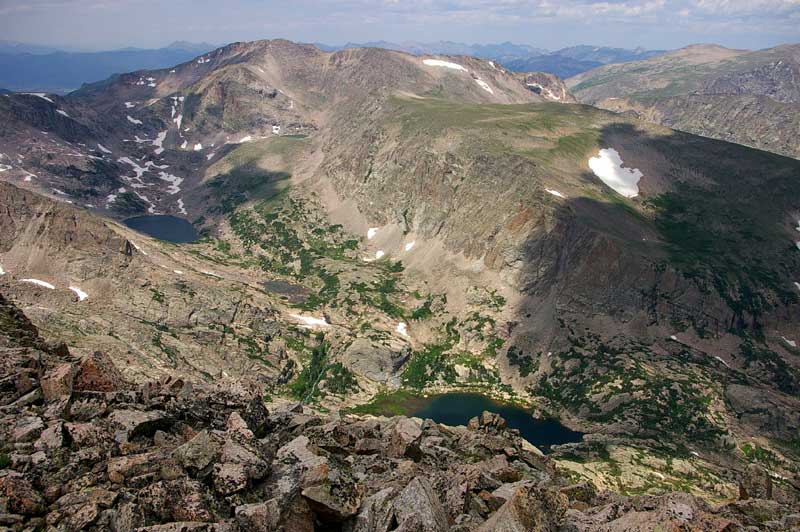 We stayed on the summit until 1:00 before we headed down with the weather building to the east. It started backing up into the canyons by the time we got back to the trees: 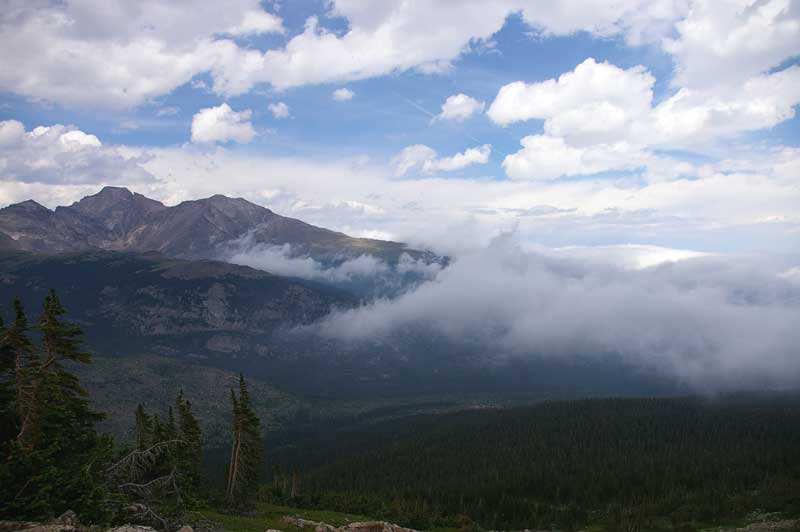 It started raining lightly as we passed Ouzel Lake but I didn’t put on any rain gear until we stopped for water at Ouzel Falls where it began to rain enough that my T-shirt and shorts I had worn all day would have gotten soaked.
We made it back to the trailhead at shortly before 8:00 pm for a total over 15 hours.
Yep, I’d say it is a little more than doing Longs Peak.
Ed Huesers
http://www.grandshelters.com
http://www.facebook.com/Igloo.Ed
Top
Post Reply
1 post • Page 1 of 1

Users browsing this forum: No registered users and 3 guests