Enjoying the off season

Enjoying the off season

by Igloo Ed
I have had a few good trips this summer but had work at home that stopped me from getting up as much. I did however get up with some friends that come in from Pittsburgh every spring and fall. We went up last Tues. on what was a bit of an epic trip.
We headed out from Bear Lake escaping the blasting winds in the parking lot and headed up the wooded winter trail to Nymph Lake with the intent of traversing Otis Peak to descending Andrews Glacier. I kept hoping, waiting, and watching as we made our way to the base of the climb and the end of the protection of the woods, but the winds only seemed to get worse as we got higher. Howling, shaking the trees, and whipping the clouds past at unfathomable speeds, the wind just kept blowing harder and harder.
I’d pretty much decided we’d need to change our plans but we continued past the exposed corner before the trail drops down along the ridge too Chaos Creek. We had talked about it and decided to go to the base of the climb and then decide.
The winds died a bit, after we rounded the corner and got back in the little hollow and woods, but picked up again as we headed down the wooded trail to the creek. The trail was running just the right direction that the wind was whipping right up the wooded trail.
I had been thinking the crew might be interested in doing the glacial knob tour I’d first done in 2008. We’d already passed the first knob of the tour but it was pretty miniscule and didn’t offer great views with it being so wooded on top, but we were in prime position to climb the second knob of the tour.
I told the guys that we’d be on Otis’ ridge and the westerly exposed slope which would put us in direct wind for five hours or more. Snow was whipping off the pass and peaks at times and it wasn’t snowing.
I asked Glenn if he’d like to do the knob tour and he knew what I was talking about from reading my previous trip report in 08. He agreed to the knob tour pretty quickly.
We’d gotten out of the parking lot at 6:50 and it was understood everyone wanted a long day and the knob tour would certainly satisfy that need.
We got to the top of Knob 2 and came out into roaring winds again. I was lucky enough to get a clear picture, the way the wind was blowing me around, but I certainly couldn’t find a stance that would hold me steady enough to frame the pictures properly. Only one of the pictures turned our clear enough to use due to the wind whipping me around: 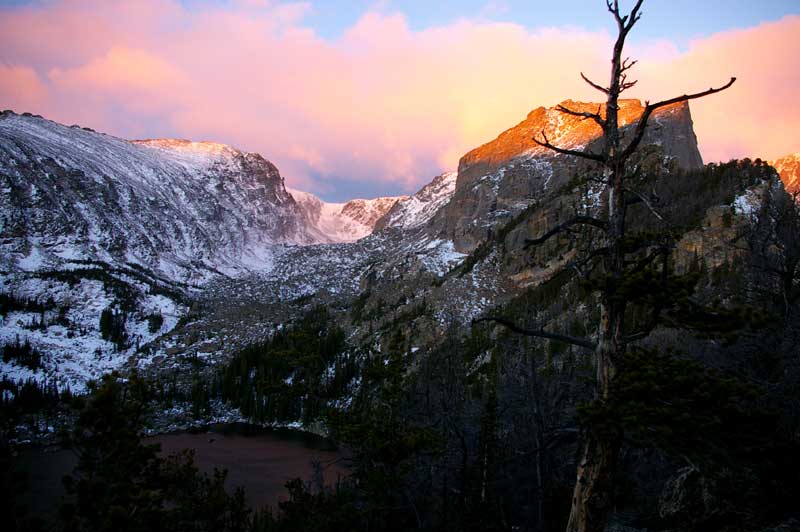 To the south of us we could see the clouds whipping along from right to left and crashing into the peaks. At one instant, a cloud on Longs Peak looked to be compressed into a thin layer on its western face: 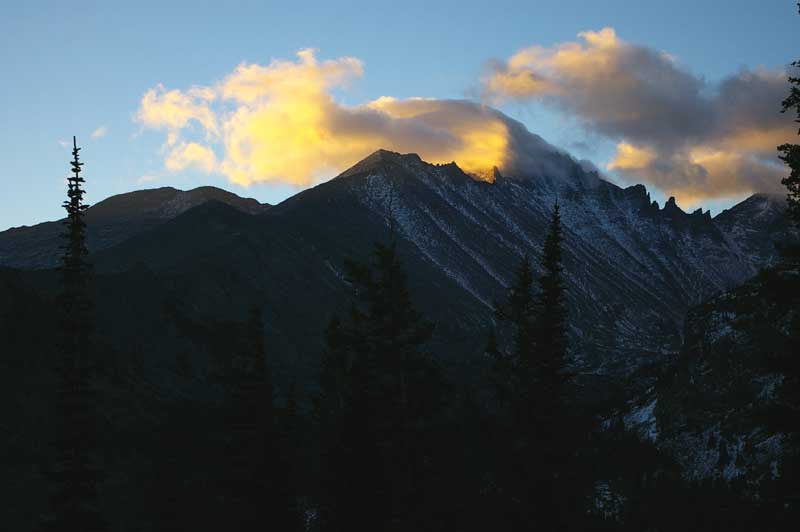 It wasn’t pleasant at all on the knob so we headed back into the woods and down to the north side of Chaos Creek where we headed east to Knob 3 via a mostly flat ridge.
Sunrise was over long before we reached the knob but the lighting and weather was ominous to see, although hard to capture: 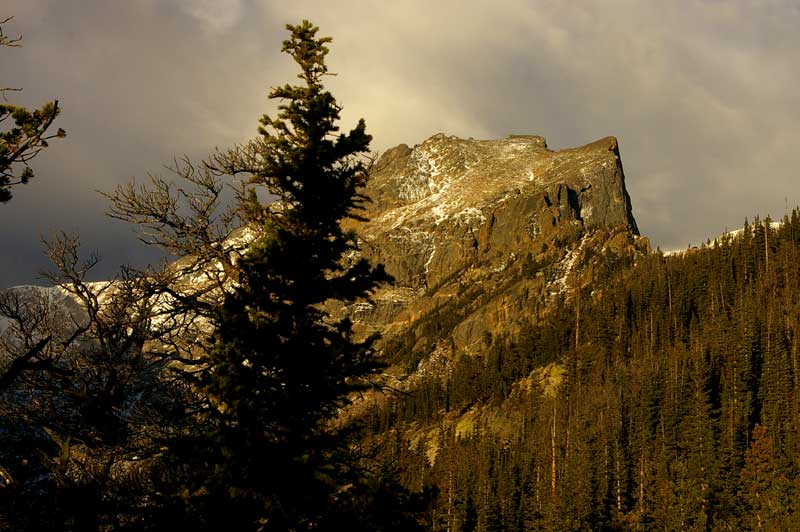 With the snow that was whipping off the pass, I was glad we’d decided not to summit: 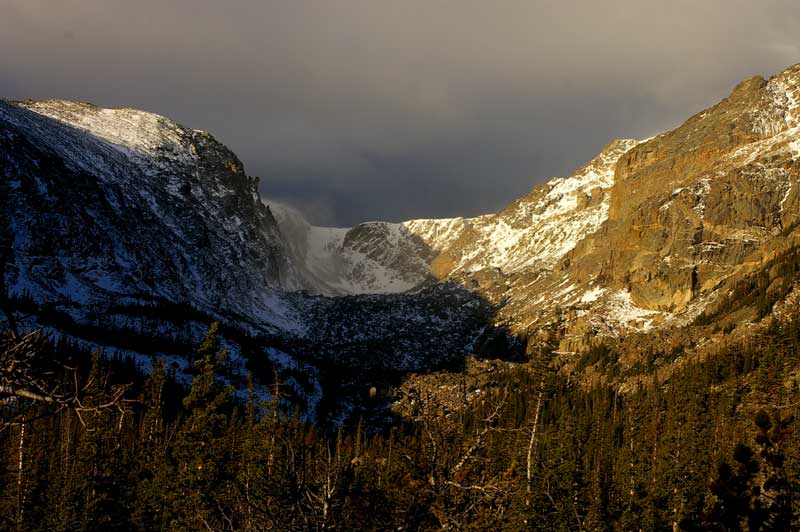 We were making real good time as we didn’t linger long anywhere, due to the wind, and we were moving fast with determination to finish the entire knob tour which put us on Knob 4 within 9 minutes of leaving Knob 3: 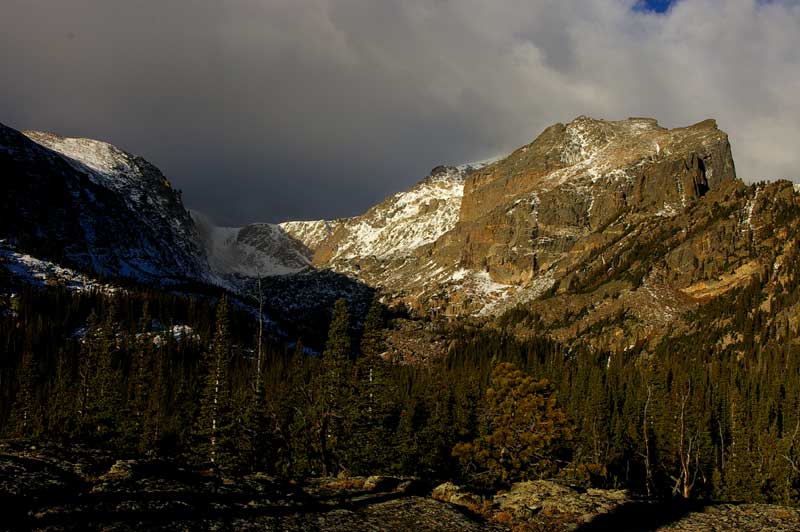 There aren’t any trees to offer any protection on Knob 4 so everyone took their pictures pretty fast and we headed off to Knob 5 just as fast as we had arrived.
The route takes it’s first big drop of the day after Knob 4 but we were soon climbing up the steep snow covered boulders to Knob 5.
The snow made it a lot more work than when I go up the slope in summer. But after having a snack, half way up the slope, we again arrived on the knob to see wind blowing clouds off of Taylor Peak: 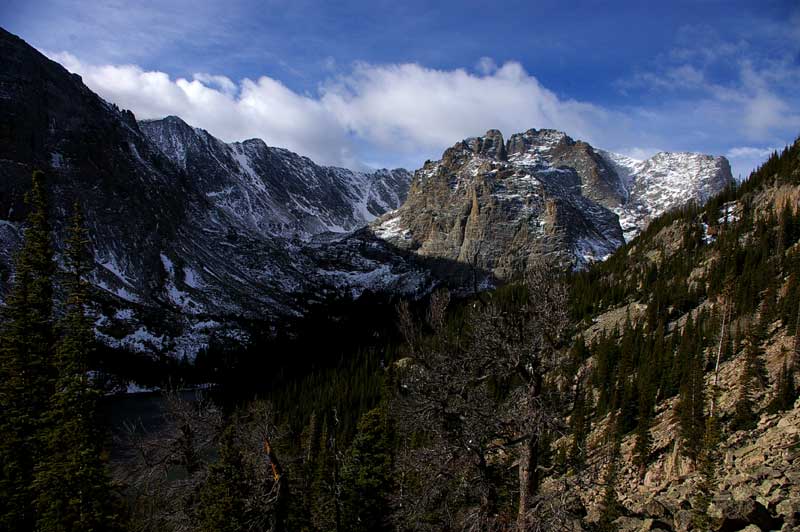 From 5, we dropped down to Knob 6 via a route I’d never tried before. It was on the south side and would be free of snow and boulders. It would have been tough going down the snow covered rocks we’d come up. I wasn’t able to get a picture clear enough to share from Knob 6, sorry.
From Knob 6, we went down a new route I’d been on the last time I’d been there and soon passed Beautiful Lake Marv before climbing up Knob 7. From the knob, I was able to get a picture of the view with The Loch showing in front of Taylor and the Cathedral Spires: 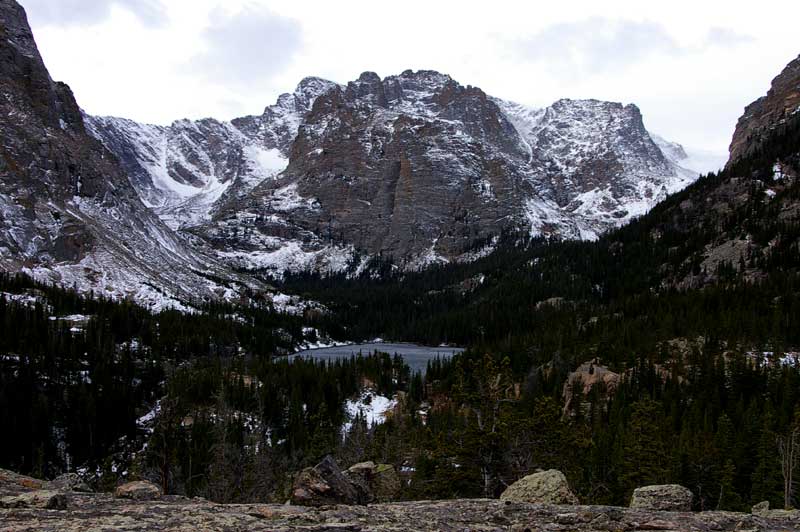 It was a short drop off the knob and then a short climb to Knob 8 where we had a view of the knob we’d just been on, in the left of this picture: 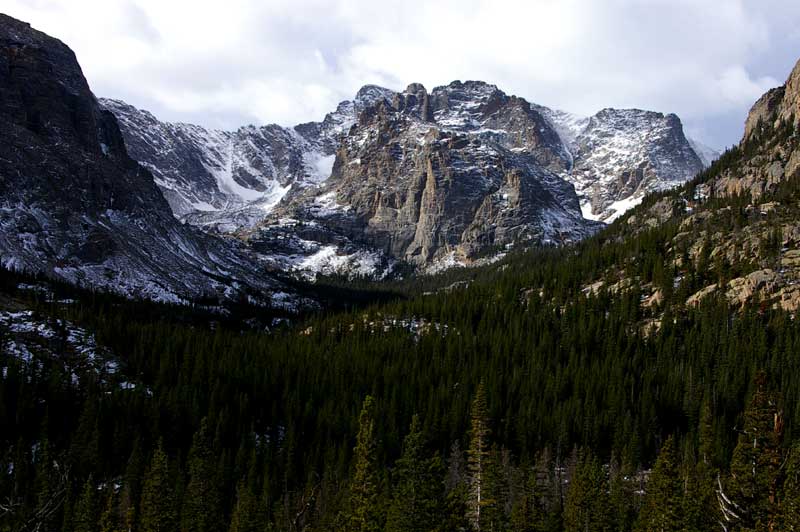 It was another long drop off Knob 8 and a long climb up Knob 9 but most of the route had the protection of the trees, giving us a much needed break from the wind. I tried to go over to the edge of the cliff and have a look at my usual descent route off the knob, but I didn’t dare get any closer than 8 ft. from the edge. The wind was blowing me around erratically and I was lucky to get a clear picture with Knob 7 & 8 on the right side of this picture. Taylor Peak is much more visible from this perspective too: 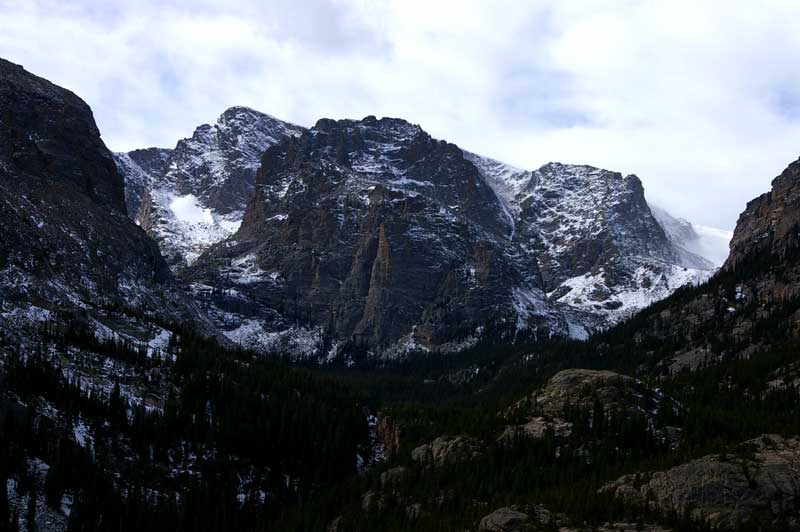 Our next and last objective was Knob 10 which can be seen behind the tree on the left of this picture. It is just to the right of the biggest tree trunk: 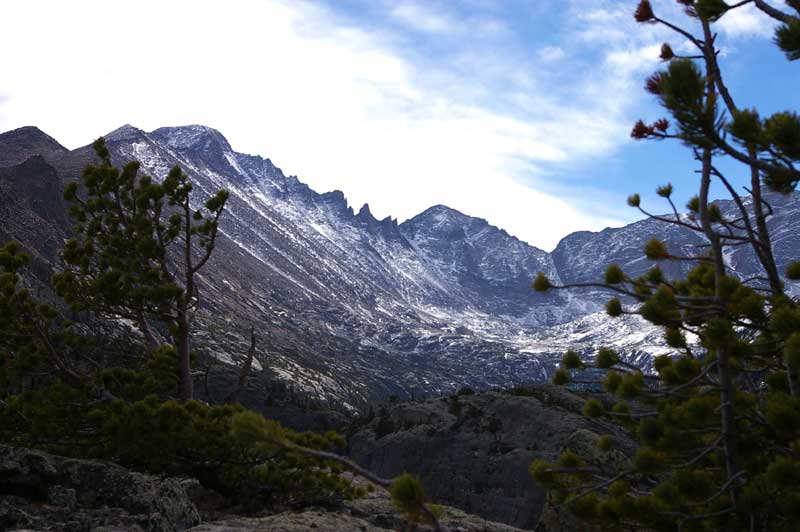 We went down another big drop from the knob and climbed the chalkstone filled couloir to the pass beside Knob 10. I’d had enough of the wind and I figured I’d let the young ones go up the short way from the pass to the top of the knob, while I took a break in a cave out of the wind.
The descent off our last knob of the day brought us down to Mills Lake where we headed back to Bear Lake and the soft seat of my car.
A full meal at Smokin Daves with appetizers had me stuffed and happy on my drive back home.
All times are UTC-07:00
Page 1 of 1
Powered by phpBB® Forum Software © phpBB Limited
https://www.phpbb.com/