We had our Christmas/family get together on Christmas Eve Day leaving me a four day weekend to go camping.
I'd hope of building an igloo on top of one of my favorite glacial knobs that has a great view but there were high winds as I left Lyons and I had my doubts that I was going to build an igloo in any exposed areas. The weather forecast was for decreasing winds the next two days and as I got closer to the trailhead I was contemplating going up to my Thanksgiving igloo to stay a night and then move on to the glacial knob for the next two nights.
Well, I sat in my car at the trailhead watching the wind and contemplating my options.
I could believe the weatherman, take my ICEBOX along to the Thanksgiving igloo and move on to the glacial knob after the wind died down, or I could leave my ICEBOX behind and just stay in the Thanksgiving igloo for three nights.
Leaving the ICEBOX behind was a big decision as there was a chance that my igloo could have sagged and I would be left without an igloo and no way to construct one.
In the end, I remembered how icy/dense the snow was that I used to build the Thanksgiving igloo and knew my chances were good that the igloo would be fine.
The ease of staying in a finished igloo eventually settled the debate in my mind and off I set with a bit of a gut wrenching feeling without my ICEBOX, but it was soon forgotten as I stomped up the trail on what appeared to be nearly two feet more snow since I was up last.
It was cold and windy but I traveled mostly in the trees where I was protected some from the wind. It was cold enough though that any breaks were short and I soon found myself at the igloo.
The igloo is right behind the tree in the foreground of this picture: 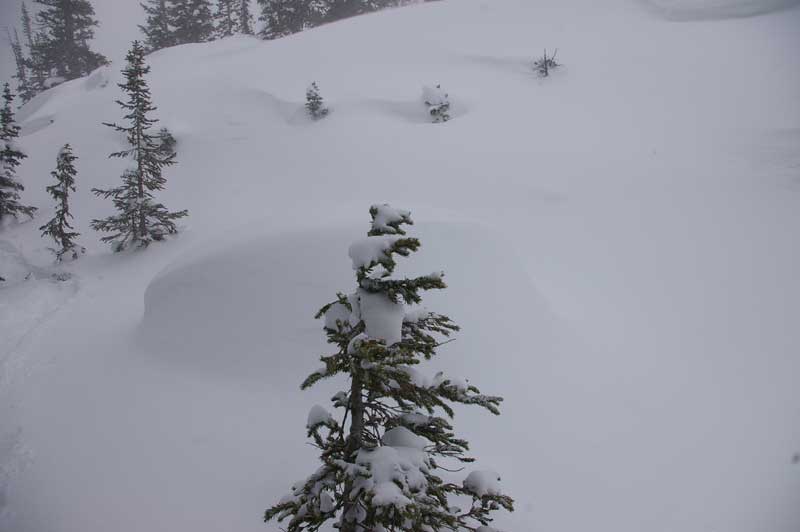 The door for the igloo is on the right side of the tree and completely buried with snow.
It had been snowing lightly during the trip into the igloo and it seemed to be picking up so I set about digging out the door and shoveling off the walk. There was a good two feet of snow to shovel off the walk and I removed some snow off the igloo itself so I could hang my door on properly: 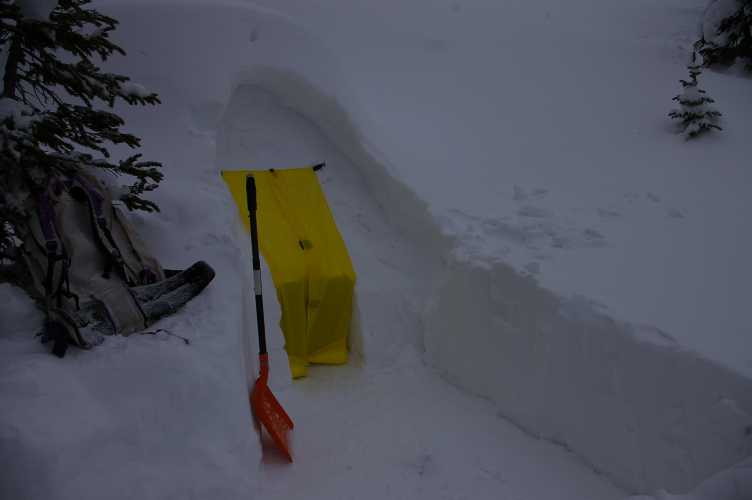 I moved into the igloo to find that it hadn't sagged a bit. The inside of the igloo had a sheet of ice on it and it was solid. It had started snowing harder as I was moving into the igloo and by the time I finished unpacking and eating there was over an inch of fresh snow on the walk.
It continued to snow through the night resulting in a good foot of fresh snow by morning. I was planning on visiting the igloo site where I'd been packing down snow for several igloos later this season so I set off back down my trail to at least break it back to the park trail. I broke trail back to the park trail and a little further but the winds were very strong and I figured I'd wait until the next day to go to the other igloo site.
On the way back I got this picture looking down the steep section of the route near the top of the ridge: 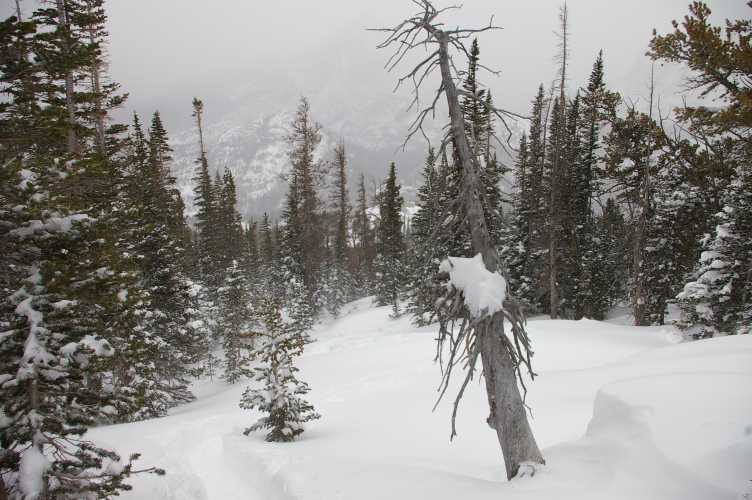 As the sun was setting it had cleared up some and the winds had died down so I went out taking some pictures.
This one is from on top of the ridge looking down at the igloo with the door just visible due to all the snow on the igloo: 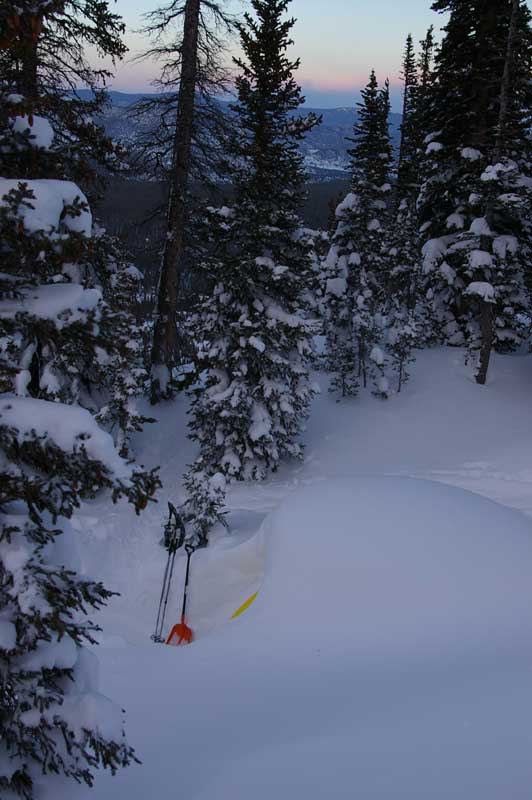 Looking over the ridge and up the canyon to the south had some beautiful colors in the sunset: 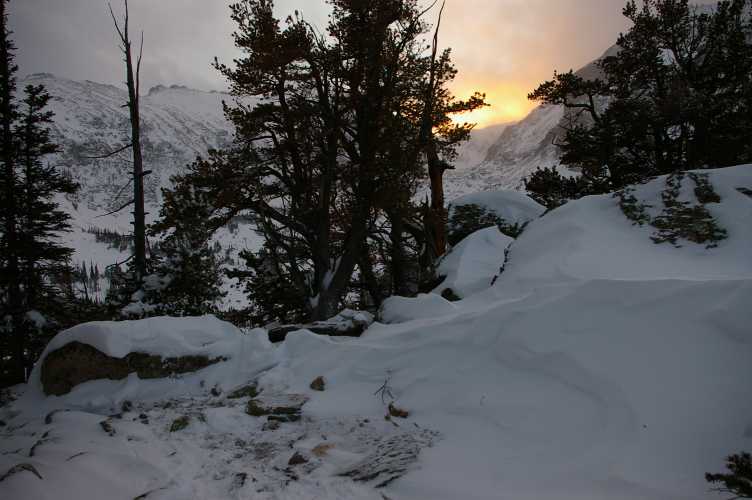 When I returned to the igloo, the colors had faded a bit but I took this picture of Hallett Peak and Flattop Mtn: 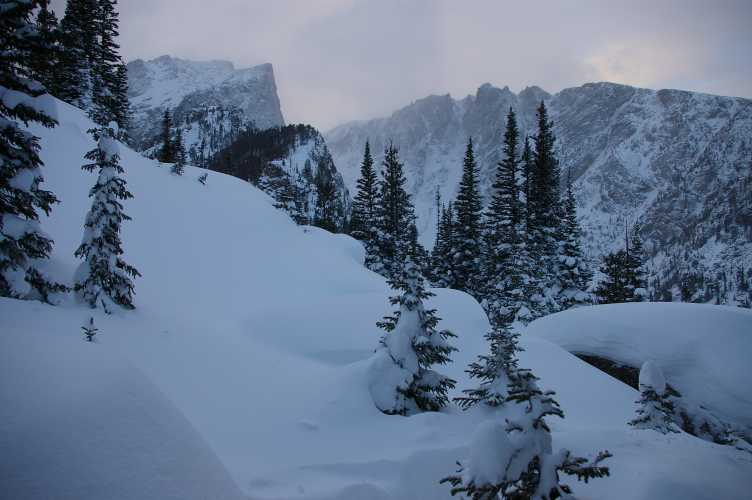 The igloo is in the lower left corner of that picture.
In the evening, the winds picked up again and I spent most of my time in the igloo giving me an early start for my other igloo site the next morning.
I'd hoped the winds would let up on my last full day of the trip but they had increase to howling speeds and the lake crossing was rather nasty.
I took this picture once across the lake and out of the high winds on the lake: 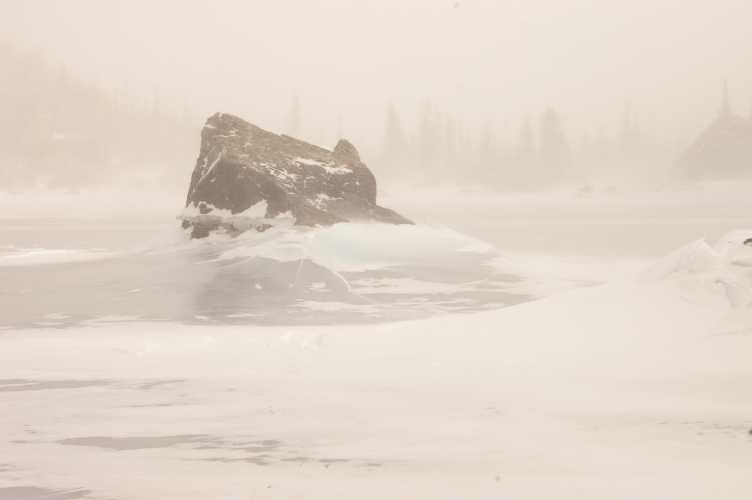 I had been warm and ice free before reaching the lake but I took this picture at the back of the lake: 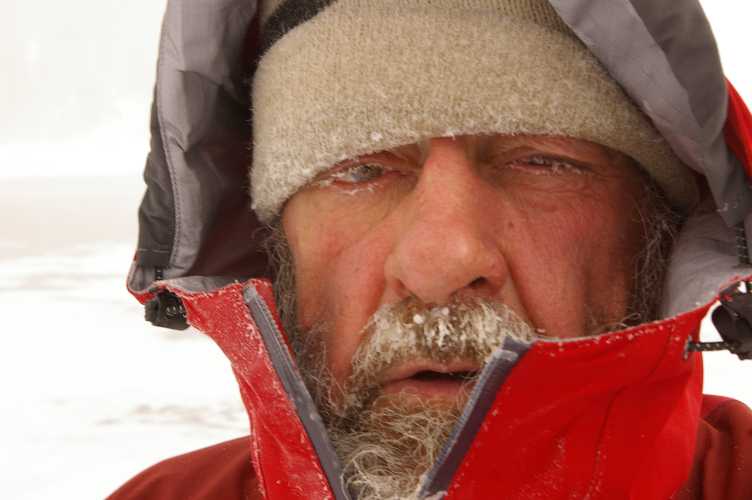 I went into the woods out of the direct wind and soon found my future igloo site and took this picture looking out from a cave we used to build our old snow cave under: 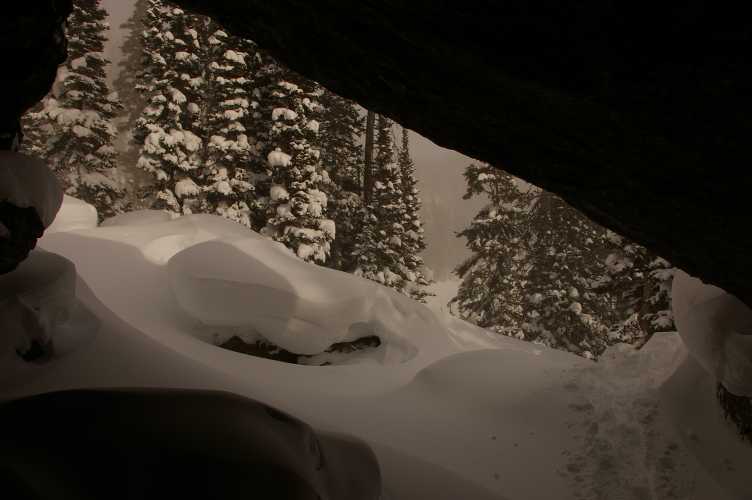 I packed down two of the igloo foundations I'd been working on and headed back to camp for one more night before return to the trailhead.
Overall, it was a cold windy trip but as always, well worth doing.
Ed Huesers
http://www.grandshelters.com
http://www.facebook.com/Igloo.Ed
Top
Post Reply
1 post • Page 1 of 1