A Spring Climb of Otis Peak

A Spring Climb of Otis Peak

My buddy, Jim, had put in 21 consecutive days on spring farm work and got caught up just in time to relieve his chomping at the bit for some snow affliction. He made the decision on Friday and also drove the 4 hrs to Estes Park so he could get some sleep before our day out. Ended up he didn’t get as much as planned but he did have a smile on Saturday morning.
Our plan was to go over Otis Peak and descend via Andrews Glacier by first gaining Otis’ east ridge near Lake Haiyaha.
The ascent route is up snow that is steep enough to slide out of control without an ice axe if one falls. We stayed off the main open slope and in the trees to give us some security from the exposure of the wide open slope. The trees brought problems of their own with spruce traps and vertical drifts that needed to be climbed. But, there was no hazard of falling more than five feet.
A picture looking up doesn’t quite do the slope justice but: 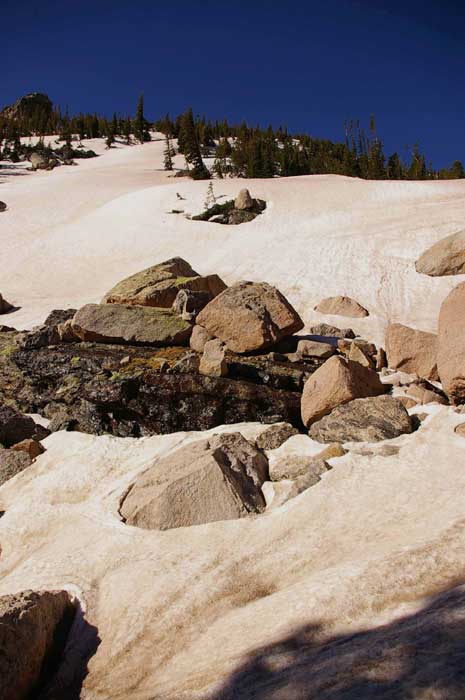 The steep snow seemed to go on longer than I remember from previous trips but we worked our way through the trees and up the drifts until it finally got a little less steep and there was bare rock and tundra to go up on. The last part of gaining the ridge involved crossing a wide talus slope and then up some more tundra. The views at the top were appreciated as we ate our first snack of the day.
Looking north gave a good view of the Mummy Range over the east flank of Flattop Mountain: 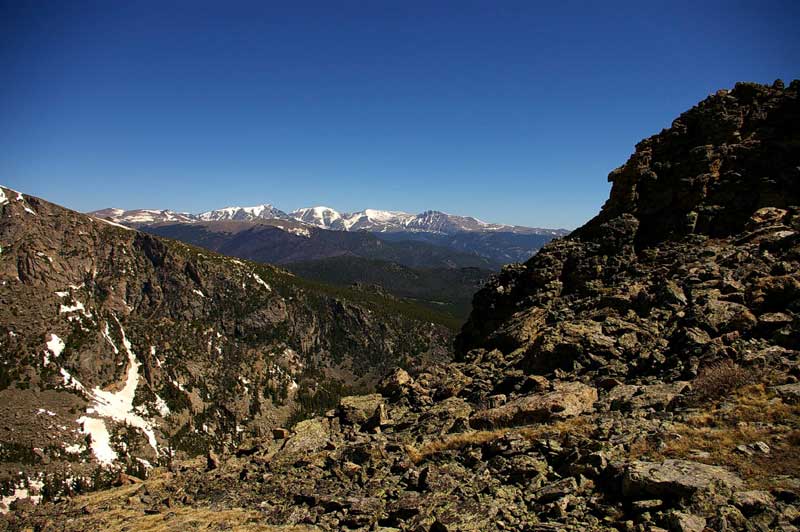 To the south east, the sun was shining brightly on Longs Peak sitting behind the flank of Thatchtop Mountain: 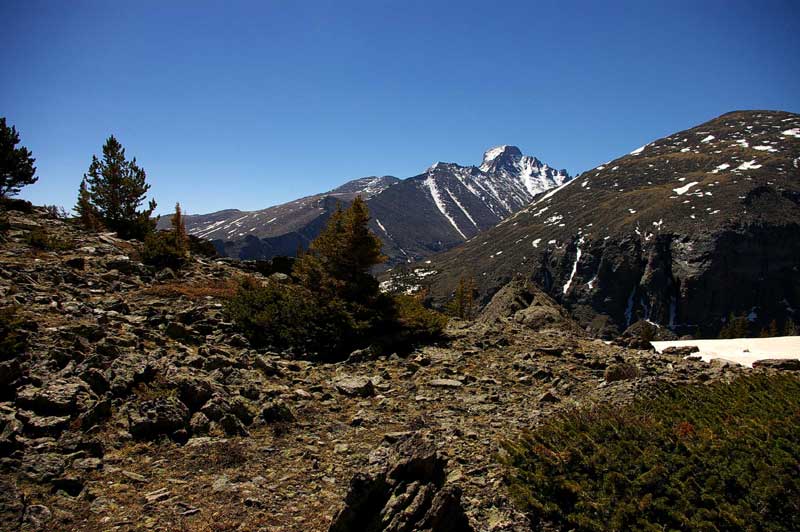 We could see that the Tough route on Longs Peak was still completely snow covered: 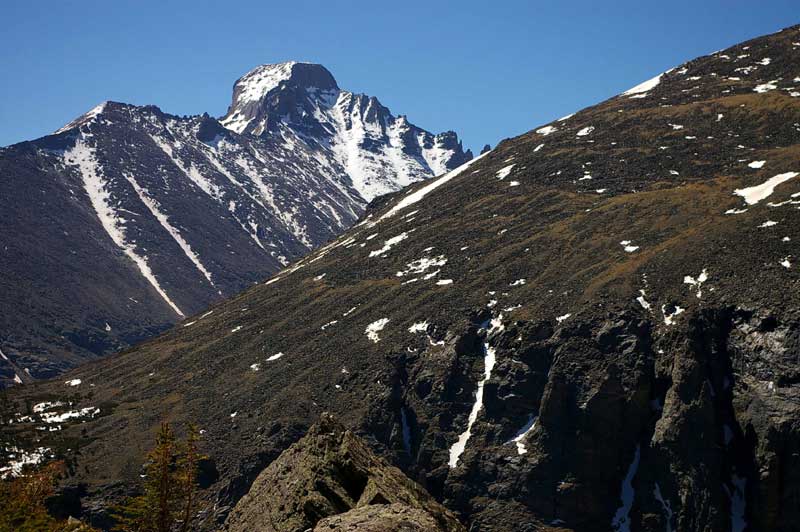 To the south west, we were looking up at Taylor Peak visible behind the ridge we were climbing along with Sharkstooth and the lower Cathedral Spires: 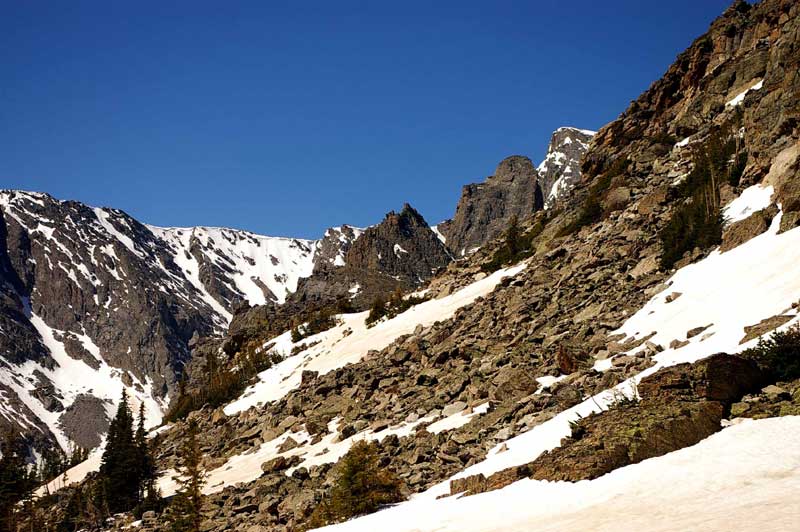 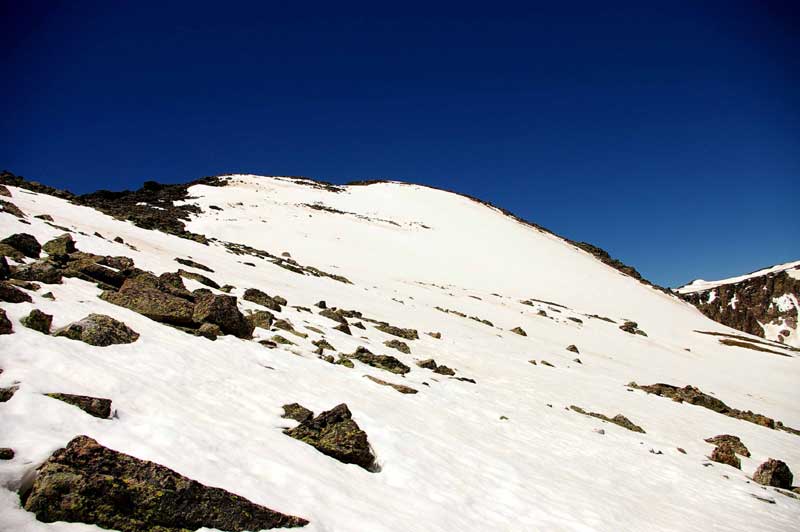 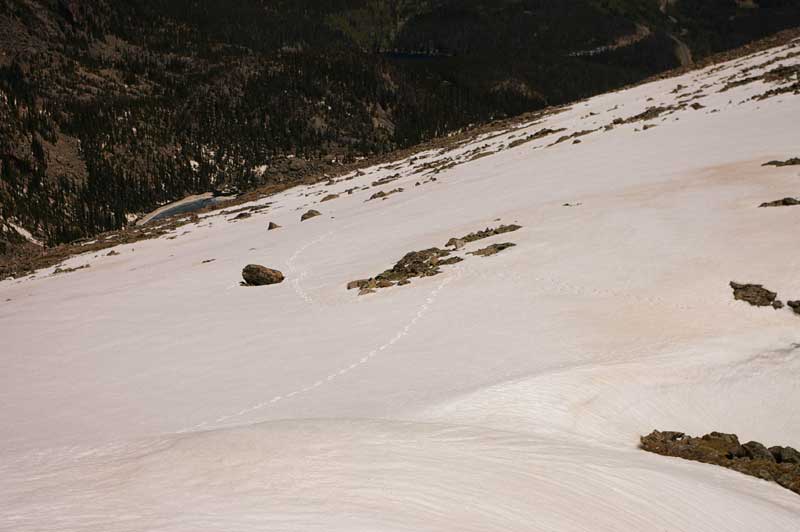 We stayed in the security of some rocks while going up the ridgeline while the views north east to the Mummys kept getting better: 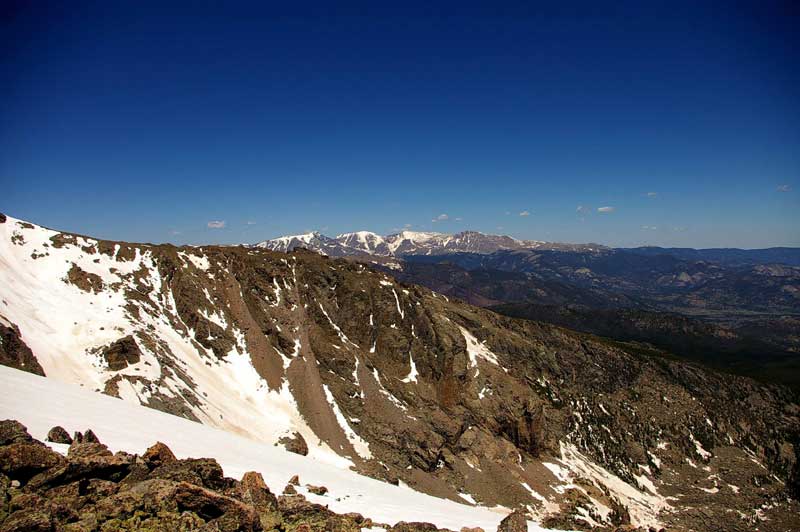 The view back down the ridge showed a lot of snow: 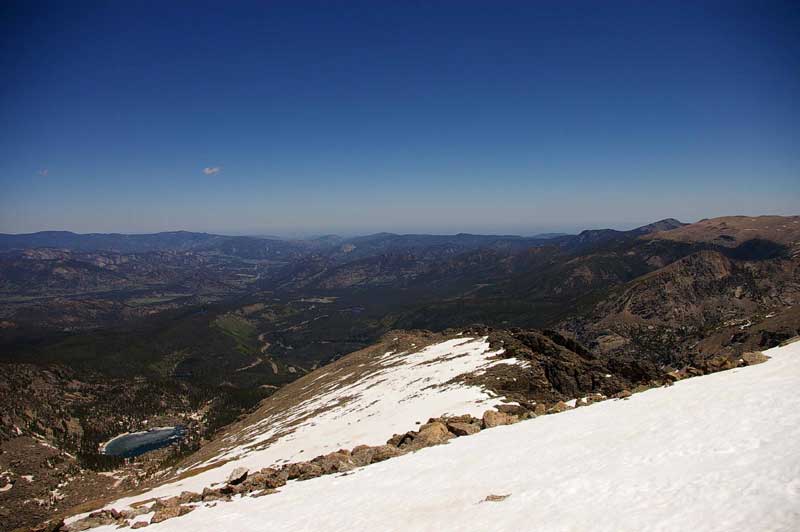 Just before gaining the false summit, we got a view of the actual summit through a notch in the ridge; 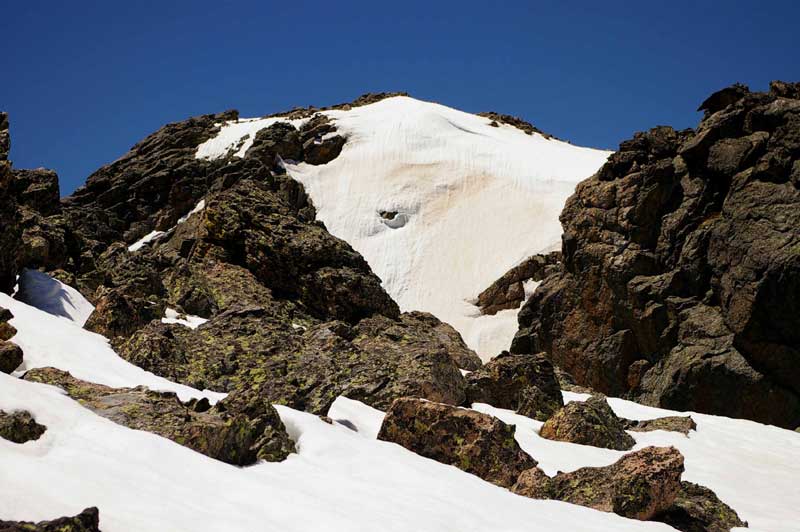 We spent a good half hour on the summit before heading down the west side of Otis and I went over to the edge to get a view of Andrews Glacier to see if any crevasses were exposed. I was glad to see there were no crevasses, just some dirty snow containing dust blown in from the desserts to the west: 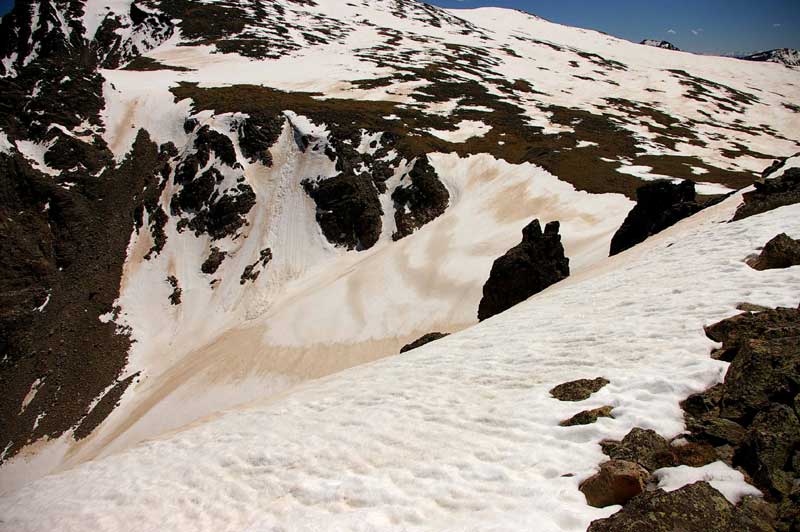 Glissading down the glacier was going to take a lot of travel time off our descent to Andrews Tarn: 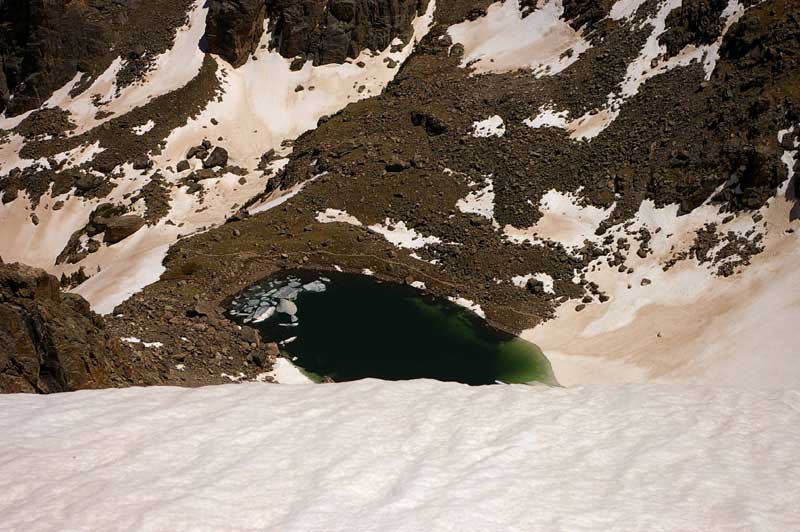 When we got down to Andrews Pass, we saw a couple climbers getting ready to go down the glacier also: 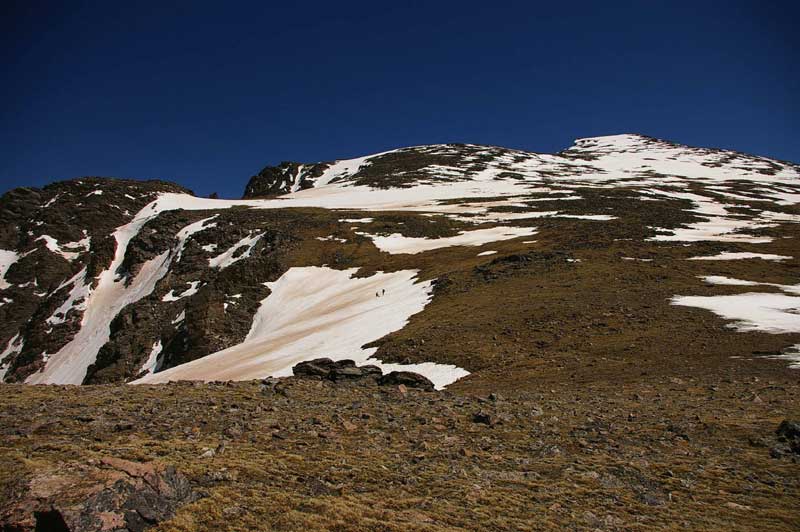 They had come down from Taylor Peak and had apparently climbed up Taylor Glacier because we didn’t see their up tracks on Andrews Glacier.

The snow was solid enough to hold us up in most places the rest of the way down and we made good time to Beautiful Lake Marv where we had our last rest before getting back to the trailhead: 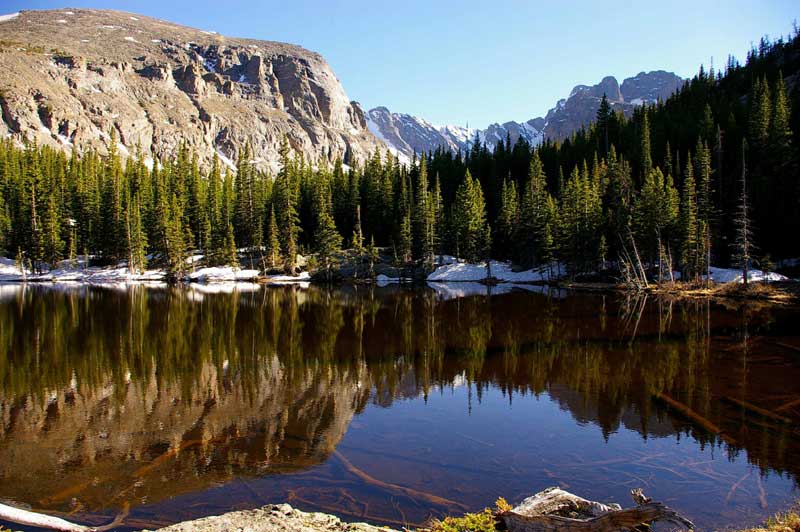 Sure glad I put on sunscreen, what a glorious day!
Ed Huesers
http://www.grandshelters.com
http://www.facebook.com/Igloo.Ed
Top
Post Reply
1 post • Page 1 of 1