Use for posting climbing pictures and igloo's.
Post Reply
5 posts • Page 1 of 1

Frank and I had planned to do a more serious igloo trip and a storm was forecast to move in around noon on the day we started the trip. Funny how both of us figured this suited us just fine as we hoped to be at camp and building the igloo about the time it started snowing. We knew it wouldn’t make good pictures compared to the glorious sunny days of Colorado but we both know the peacefulness of being out in the falling snow.
It was a cool 15F. in Estes Park when I passed through and probably 10F. at the trailhead. Although cold, I love those temps as snow doesn’t melt on me and get me wet and I don’t work up as much of a sweat.
The peaks had some clouds on them as we left the trailhead but there was still a lot of blue sky and warm sun as we headed up the trail, making for a very pleasant day of breaking trial up to Haiyaha. My friend Tim had decided to tag along as far as the lake and then return with his friend he had brought along so he wouldn’ bet snowshoeing solo.
I hadn’t been up the trail for a few weeks and what scant snow we had received since then was easy to break trail through.
We parted ways with Tim a short distance before the lake and headed up the side of Otis Peak hoping we’d have an easy go of it. The snow in the woods was mostly deep enough to have a solid base but we did sink in deep in the shallow areas but not enough to slow us down.
We reached the base of the climb a bit after 10:00 am and found rocks, that are normally buried this time of year, sitting well above the snow level: 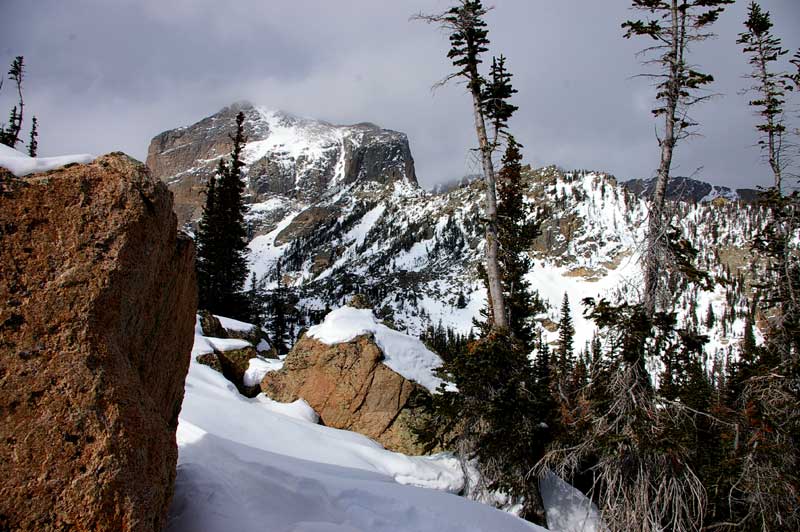 The grade of the climb gets one’s attention when looking across the slope but we stayed away from the avalanche prone areas: 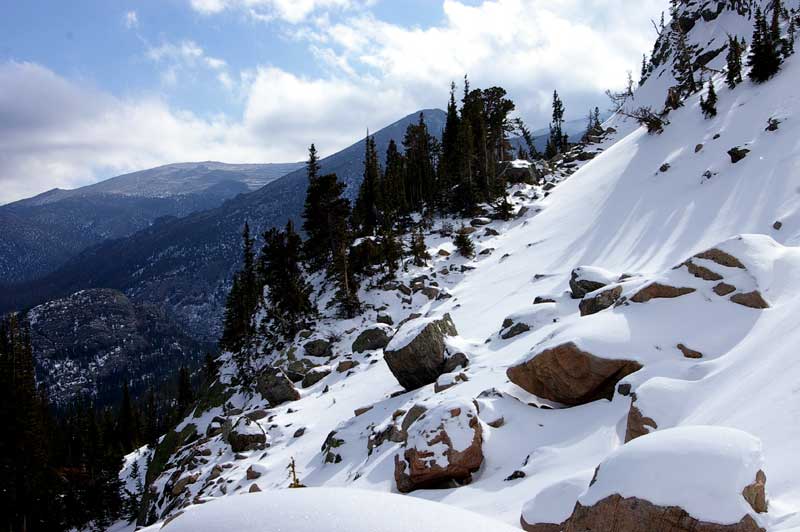 We were able to weave up the edge of the snowfield through trees and some large drifts. The weaving made the grade a bit more gradual in most areas but it also put us in shallow snow amongst some of krumholtz: 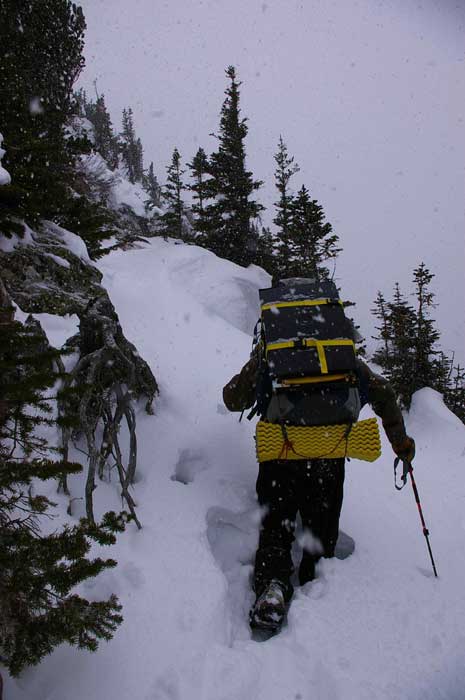 It was a very steep ascent at first but we were able to stay away from the avalanche prone snowfield.
The grade was still steep above the snowfield but we were able to travel on the main drifts and avoid the krumholtz. We also had to take our snowshoes off for a good amount of rock hopping until we neared the ridge top where the snow got deeper again.
We arrived at the campsite a bit after 1:00 pm after nearly three hours of arduous trail breaking.
We built our platform on a steep slope and took a lunch break at 2:00 pm to let the platform setup and get stronger before starting to build our igloo. It had been snowing lightly as we built the platform but stopped while we had our lunch: 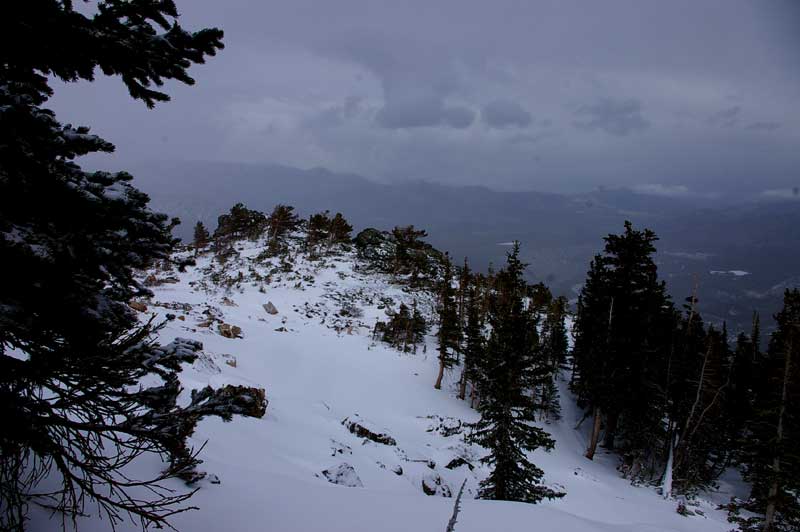 Frank started getting the igloo tool ready at 2:15 on the platform that still had the avalanche probe sticking up in the center of the platform. We’d used the probe to find a deep spot amongst the underlying boulders for our door and trench: 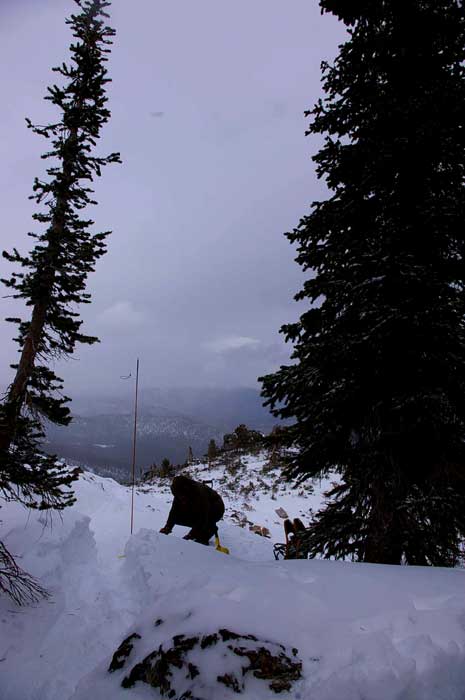 It had taken quite a bit of snow to make a level platform big enough for our 8 ft. igloo: 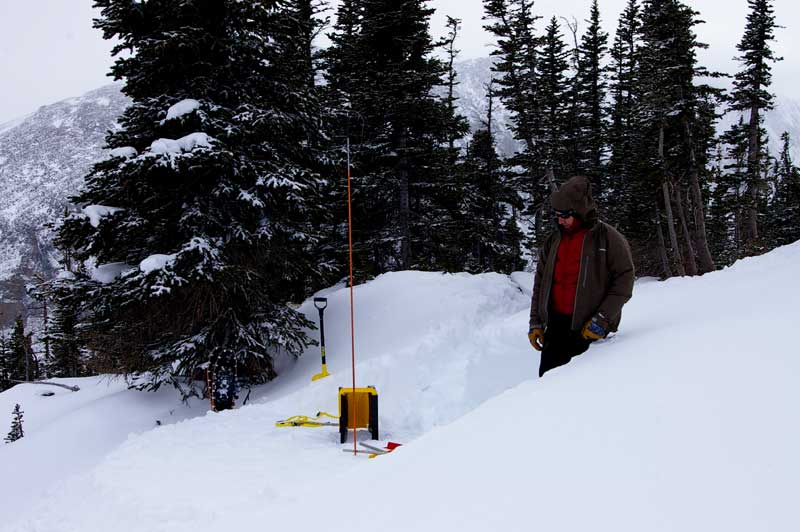 We worked on the igloo for two hours before taking another short break: 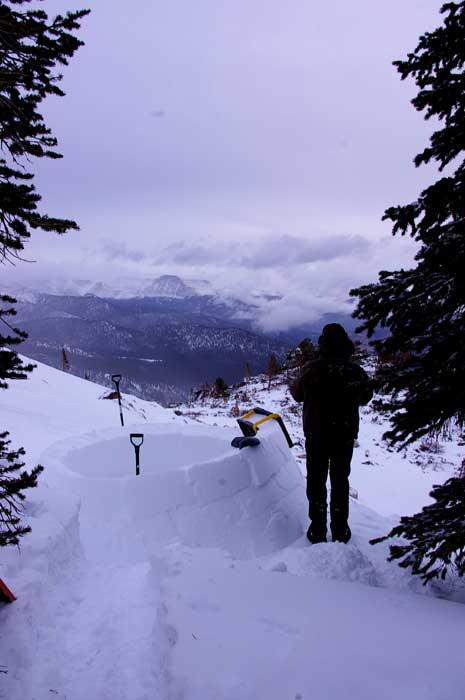 Although the site doesn’t have a 360 degree view like my other favorite campsite it does have a good view: 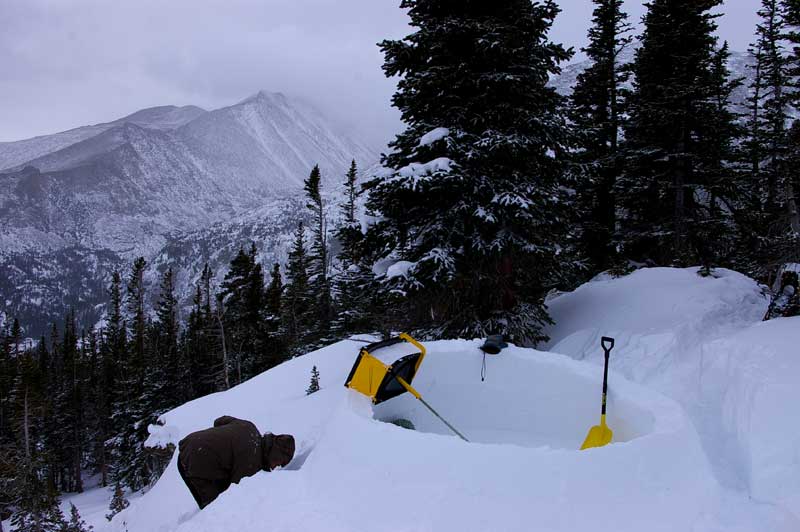 Another hour and the sun started setting lighting up the clouds to the NE: 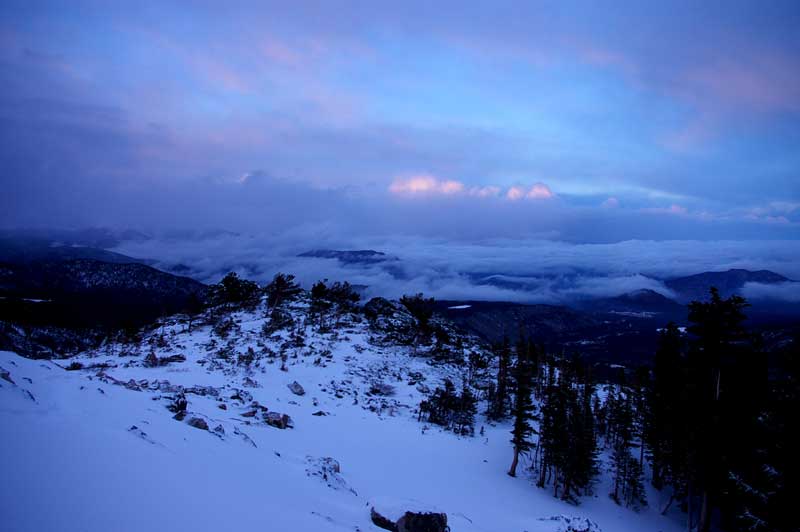 We worked with headlamps for the last part of the igloo build but we were relaxing and eating at 9:15 pm. We awoke the next morning to find 4 or 5 inches of snow had fallen overnight and the skies were overcast: 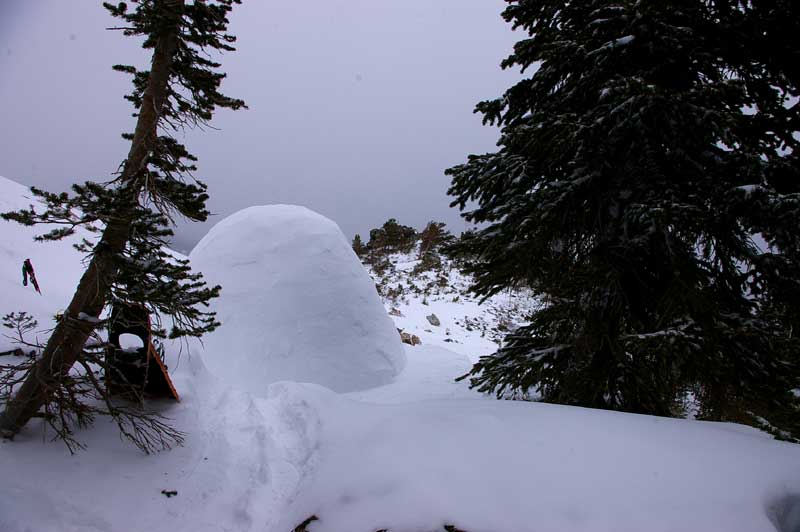 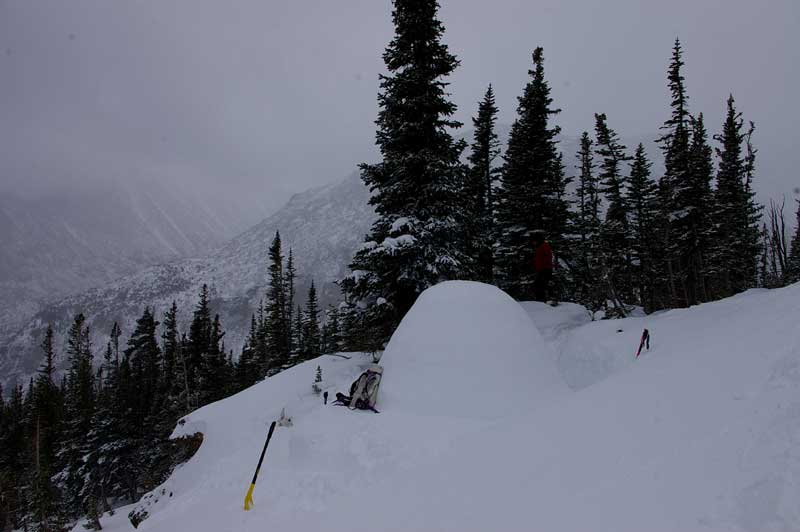 I had shoveled the walk in the morning and camp was sweet: 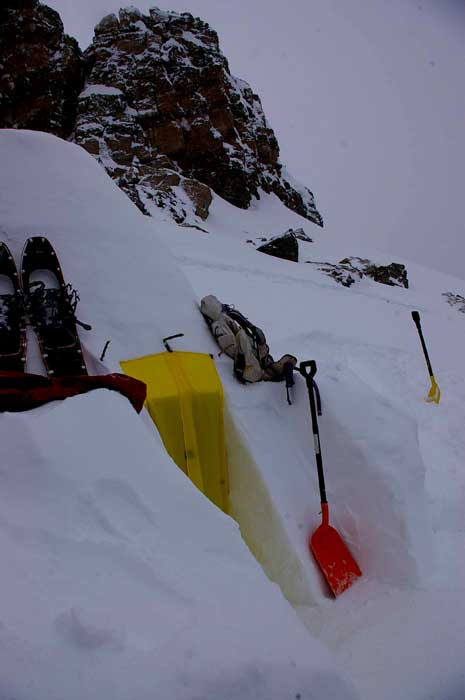 The descent was much better than the previous day’s ascent, we were able to see and follow the braided drifts through the rocks: 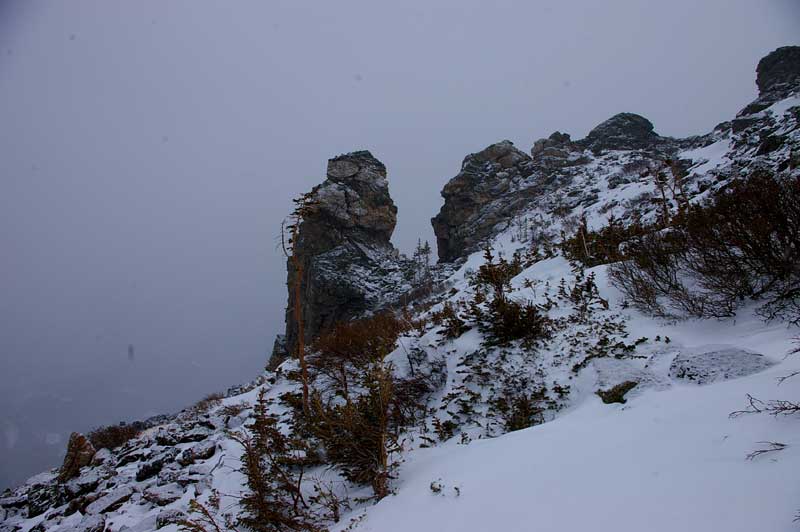 There were areas of small rocks we had to cross from one drift to another: 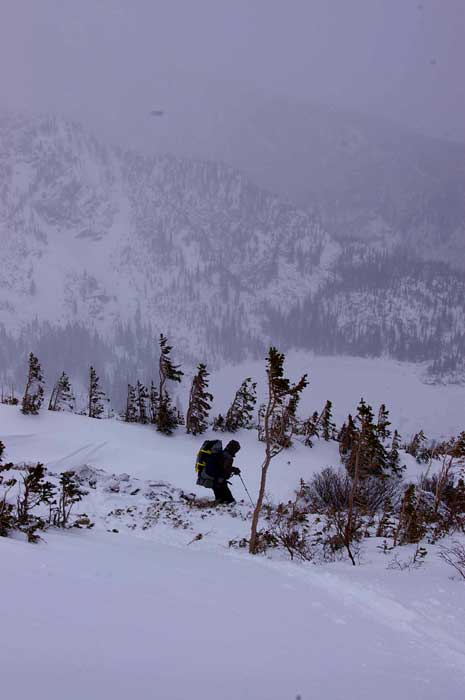 We got back to the trailhead at 2:30 and I was dragging a bit but it was a good drag.
Ed Huesers
http://www.grandshelters.com
http://www.facebook.com/Igloo.Ed
Top

I love to read about your adventures Ed and I admire the quality/composition of your photos. That's a lot of effort though for one night. Sometime I think it would be cool to have two parties do a loop hike, each party going opposite directions around the loop. When you meet in the middle you exchange coordinates for igloos that were built. Going in you have to build, heading out you get the benifit of the other party's labor.
Top

Hiatus wrote:I love to read about your adventures Ed and I admire the quality/composition of your photos. That's a lot of effort though for one night. Sometime I think it would be cool to have two parties do a loop hike, each party going opposite directions around the loop. When you meet in the middle you exchange coordinates for igloos that were built. Going in you have to build, heading out you get the benifit of the other party's labor.

Thanks, I'm glad my pictures turn out as good as they do.
It is a lot of effort for one night in those snow conditions but it's good training both physically and learning how to deal with various types of snow.
Frank is getting good enough for a summit igloo build.
Ed Huesers
http://www.grandshelters.com
http://www.facebook.com/Igloo.Ed
Top

Love the photo's. I like how you used the probe.
Top

Jeff wrote:Love the photo's. I like how you used the probe.

Glad you like the photos, thanks.
Yep, the probe works pretty nice. I've been using my ancient Ramer ski poles but they are bigger/tapered/bent and don't slide through the snow like the probe does. The probe is pretty effortless and goes in real nice and strait for finding the edge of an underlying rock.
I've had good luck at that spot before with my ski poles but the snow conditions this year were pretty low and getting it spot on made the igloo much more comfortable.
I'm torn between adding the weight to my gear or continue using my ski poles. One trouble with my ski poles is the same snap system is used that we use on the ICEBOX poles. In hard spring snow, the clip can get depressed which results in part of the pole sticking way down in the snow. I've had to dig them out twice now and it's not fun. Maybe I ought to pony up and by my own avi pole.
I don't have any avi gear as I stay away/out of those areas.
Ed Huesers
http://www.grandshelters.com
http://www.facebook.com/Igloo.Ed
Top
Post Reply
5 posts • Page 1 of 1