Use for posting climbing pictures and igloo's.
Post Reply
3 posts • Page 1 of 1

The planning and preparations for trips is one of the funnest parts of a trip, I get to think of all the things I'll encounter to make sure I have everything. Tonight was the beginning of my food preparation and one of my main staples is Wasa Light Rye cracker (crisp bread) and cashew butter. I make them triple decker and put as much cashew butter in as possible to where it doesn't squeeze out.
I eat one at mid morning and one at mid afternoon and beings as it's a three night trip I'll be doing over turkey day, I'll require seven of these lunkers: 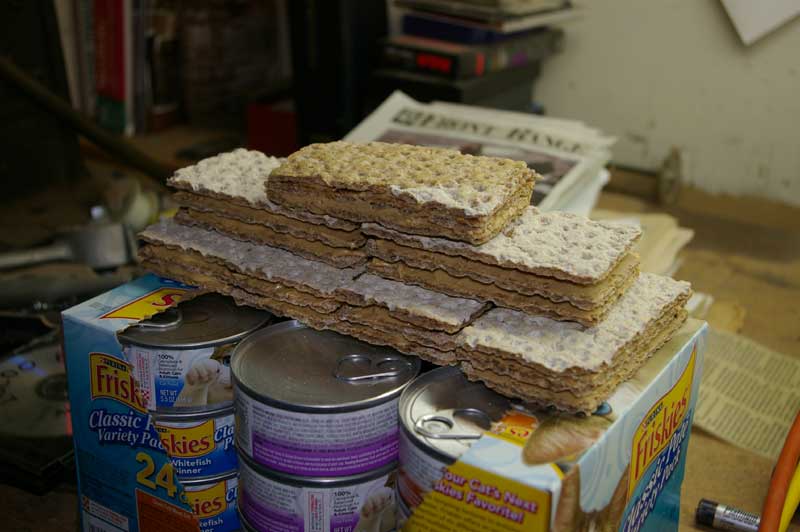 I'll be heading into the woods an Thursday but had went up last weekend to check on the igloo I built the weekend before. Well, it was in fine shape and it'll make a fine home for the Thanksgiving holiday weekend: 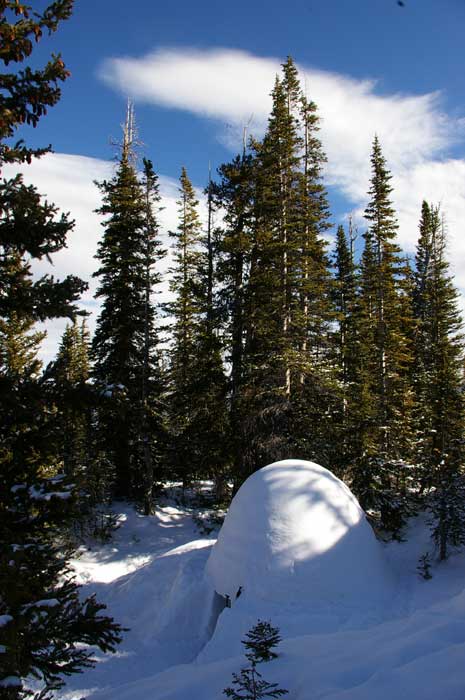 Is the friskies for the mountain lions?

Aaron wrote:Is the friskies for the mountain lions?

People have been asking what I'll be eating on this fine Thanksgiving Day. A picture may help: 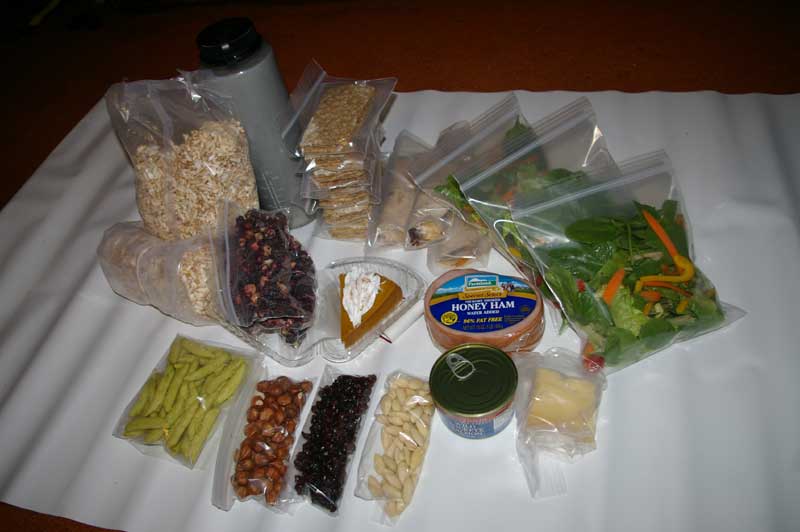 Starting on the left there is 1 1/2 liters of milk, 1 1/2 bags of Kashi Seven Grain puffed cereal with three little bags of freeze dried blueberries for the three morning breakfasts. On the right of the milk are my seven cashew butter and Wasa light rye triple decker crackers ( Lembas Bread) which I have one of at mid morning and one at mid afternoon for snacks/energy. Further right of the Lembas Bread are my three burritos, one each day at noon. Even further right are my three salads, one each evening. The chunk of cheese in front of the salads takes the place of salad dressing. It's some pretty sharp cheese.
The Honey Ham is for my holiday dinner and the next evening while the can of salmon in front of the ham is for the last evening.
The green things on the right are like Cheetos but have peas in the mix. Just a snack side. Next right is some filbert nuts then some apple juice sweetened dried cranberries and then some blanched almonds.
That triangular shaped centerpiece thingie that looks like pumpkin pie is pumpkin cheesecake.

Nymph Lake was beautiful as I passed it on the way to my igloo and I had a view of the treed hill in the middle where the igloo is: 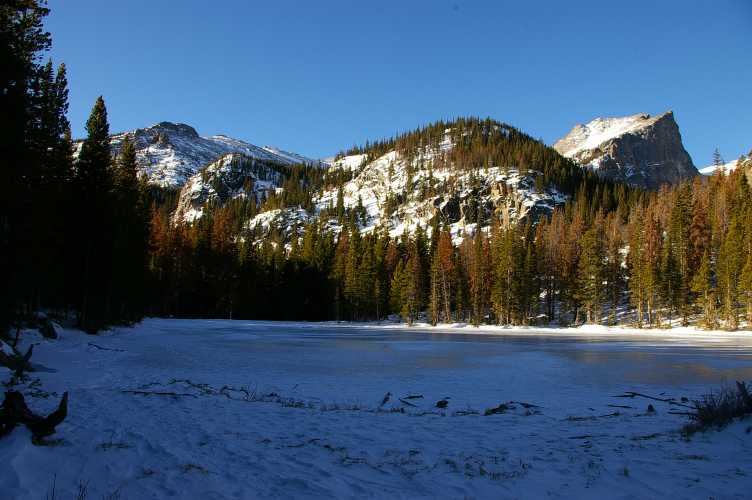 After passing Nymph Lake, I passed Dream Lake and headed up the Haiyaha trail to soon come to the big drifts that form where the snow blows off of Dream Lake and into the woods: 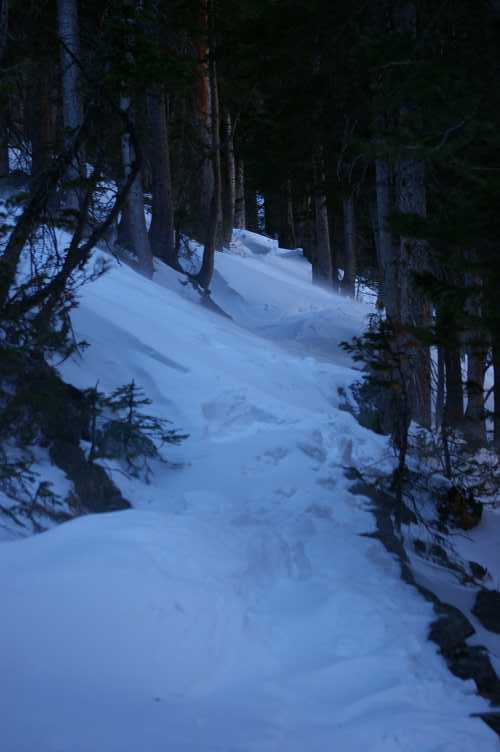 I had a great view looking south just before I turned off on my backcountry route: 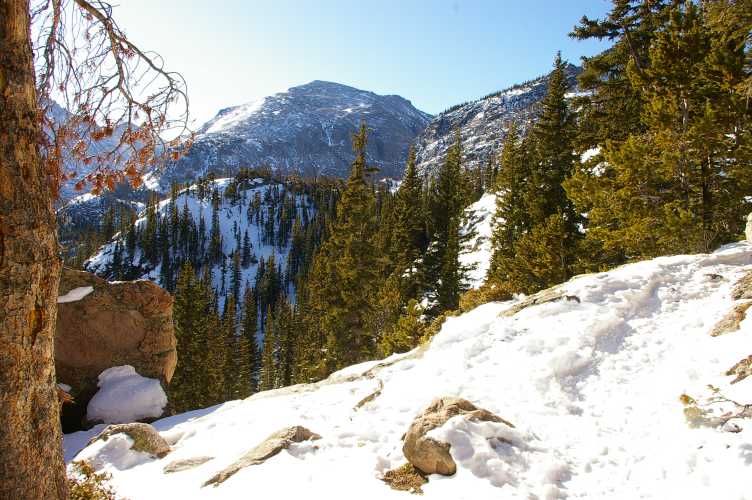 I passed some big snow covered rocks after I turned off on my route: 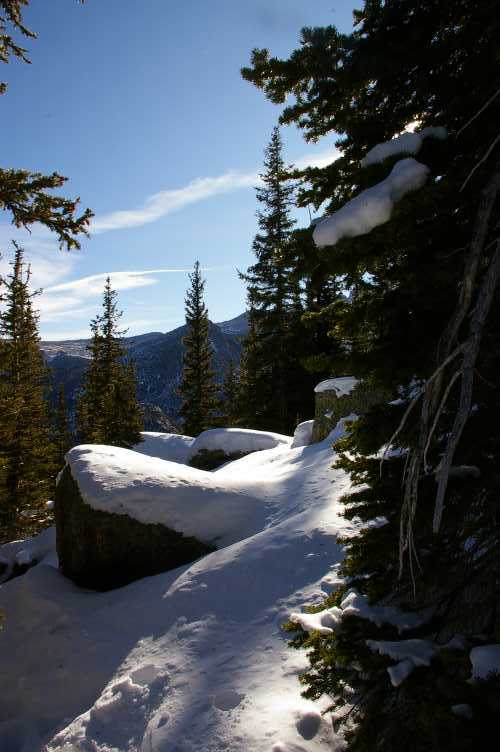 I got a great view of Hallett when I got to my igloo: 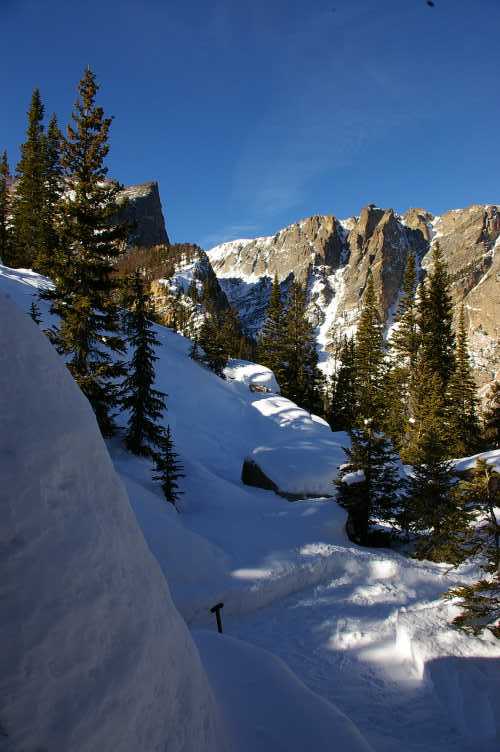 The igloo was still looking good after 1 1/2 weeks since being built as it sits down in a shady spot: 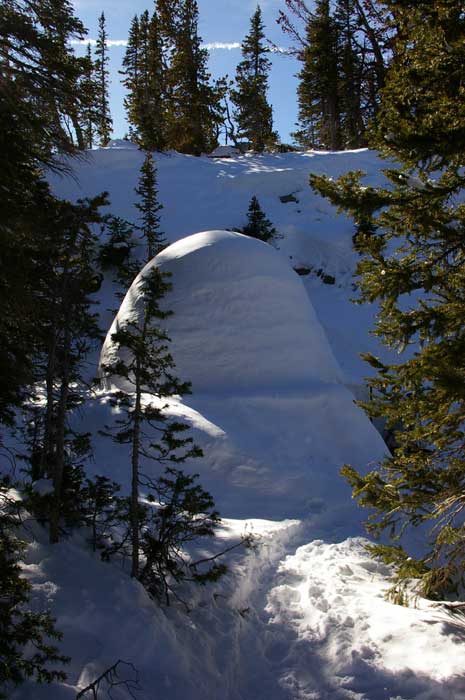 It was a beautiful day: 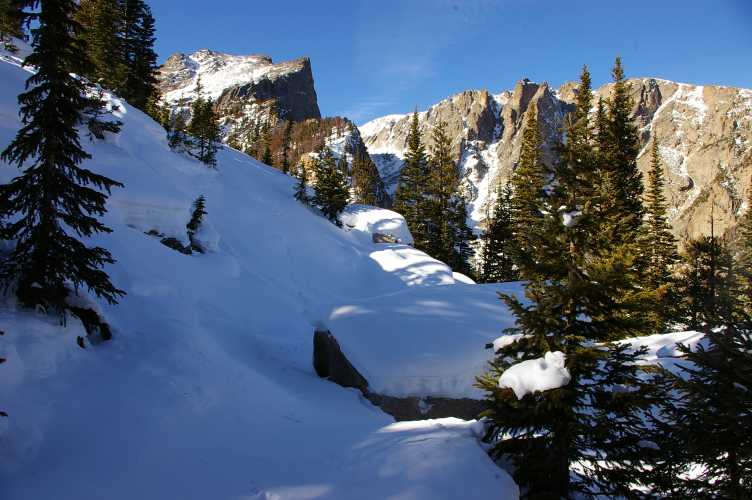 There is a great view from just above the igloo looking up Chaos Canyon and seeing Haiyaha: 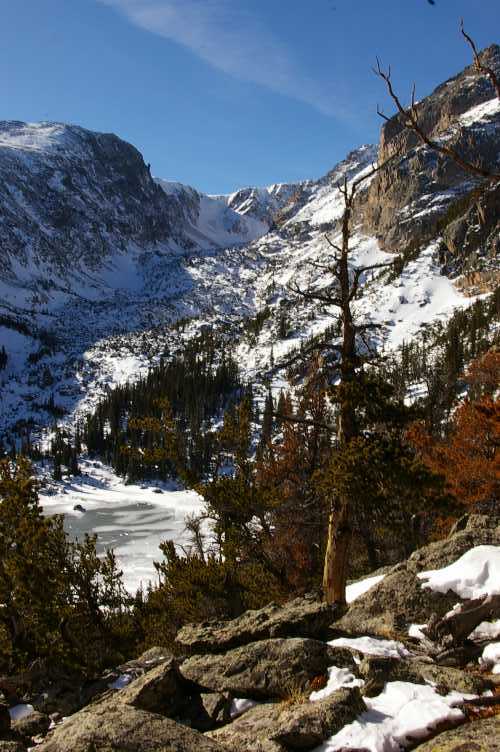 The view south wasn't any shabbier: 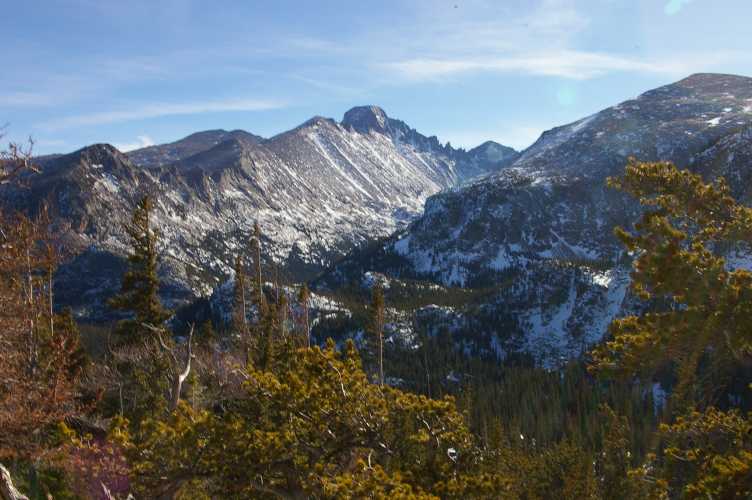 Rather than spend the weekend by myself, I brought my bud (Whitie) along and he had a blast sliding down the snow around camp: 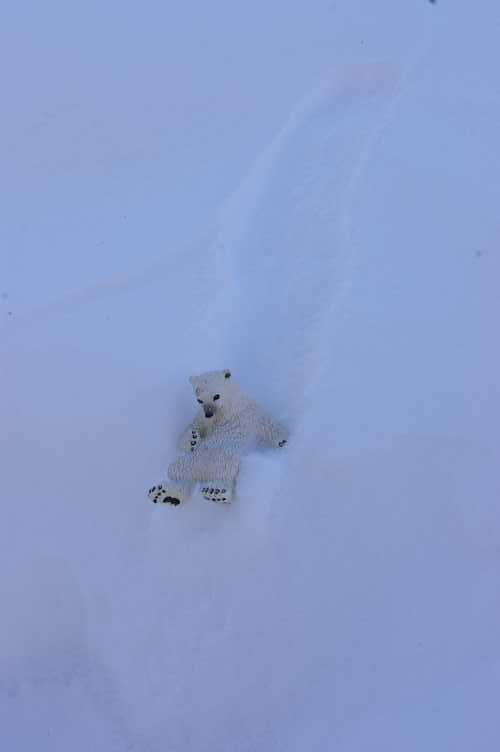 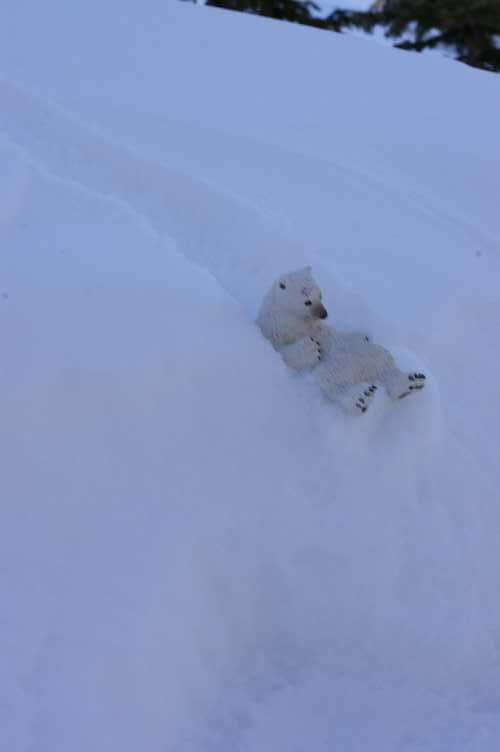 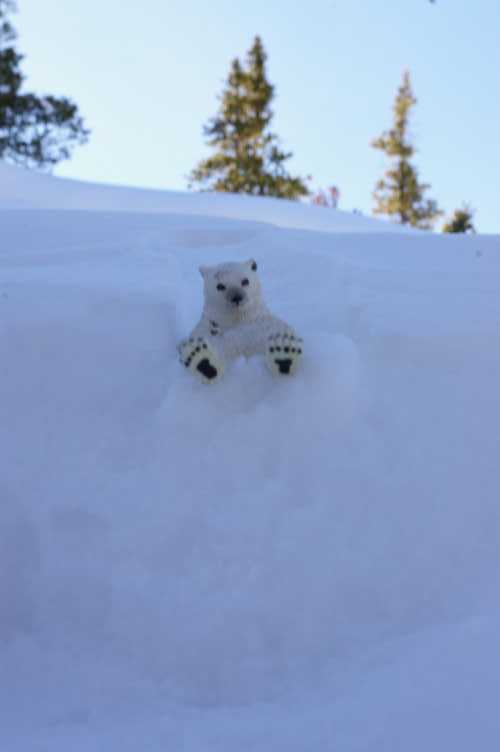 I also decided to try my hand at some snow sculpturing and I carved on it until it got too dark to see. I took these pictures when I got up the next morning, he looked like he'd had a rough night with his fingers sublimating until they were pencil thin in spots: 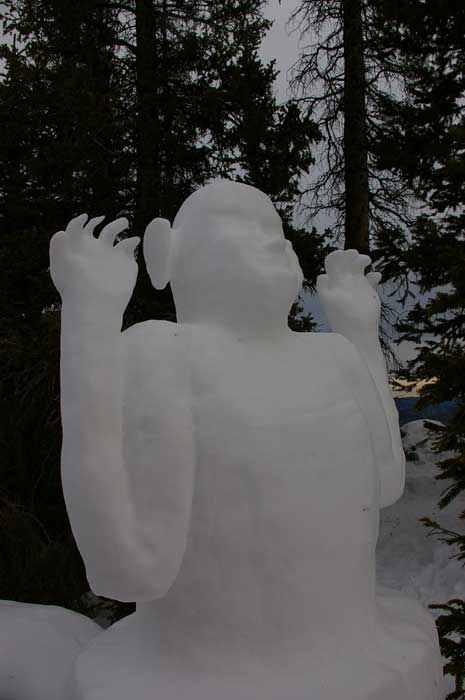 He had worn his claws bare through the night! 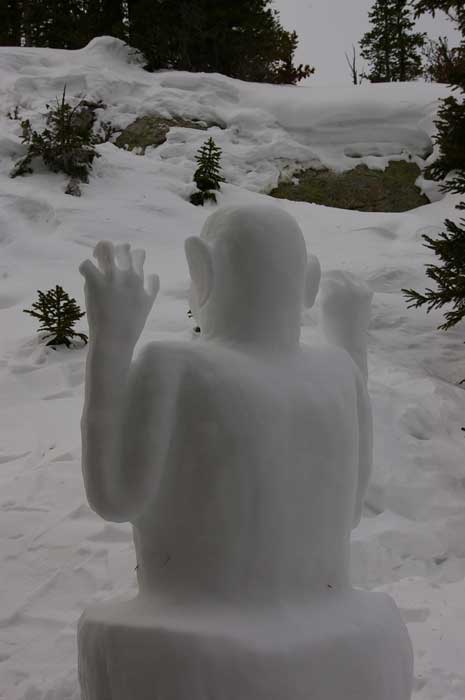